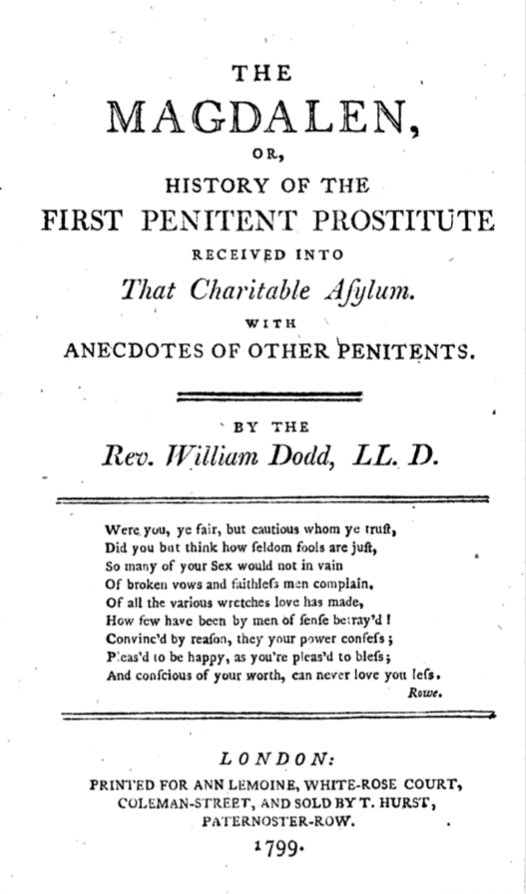 This spotlight is indebted to the extensive research of Roy Bearden-White, particularly his 2007 MA Thesis, How the Wind Sits: The History of Henry and Ann Lemoine, Chapbook Writers and Publishers of the Late Eighteenth Century, which is the first comprehensive account of Ann and Henry Lemoine’s publishing careers. The WPHP team has compiled over 200 chapbooks from Bearden-White’s bibliography of Ann Lemoine. Please visit our Sources and Related Projects pages for further research that has influenced our database. 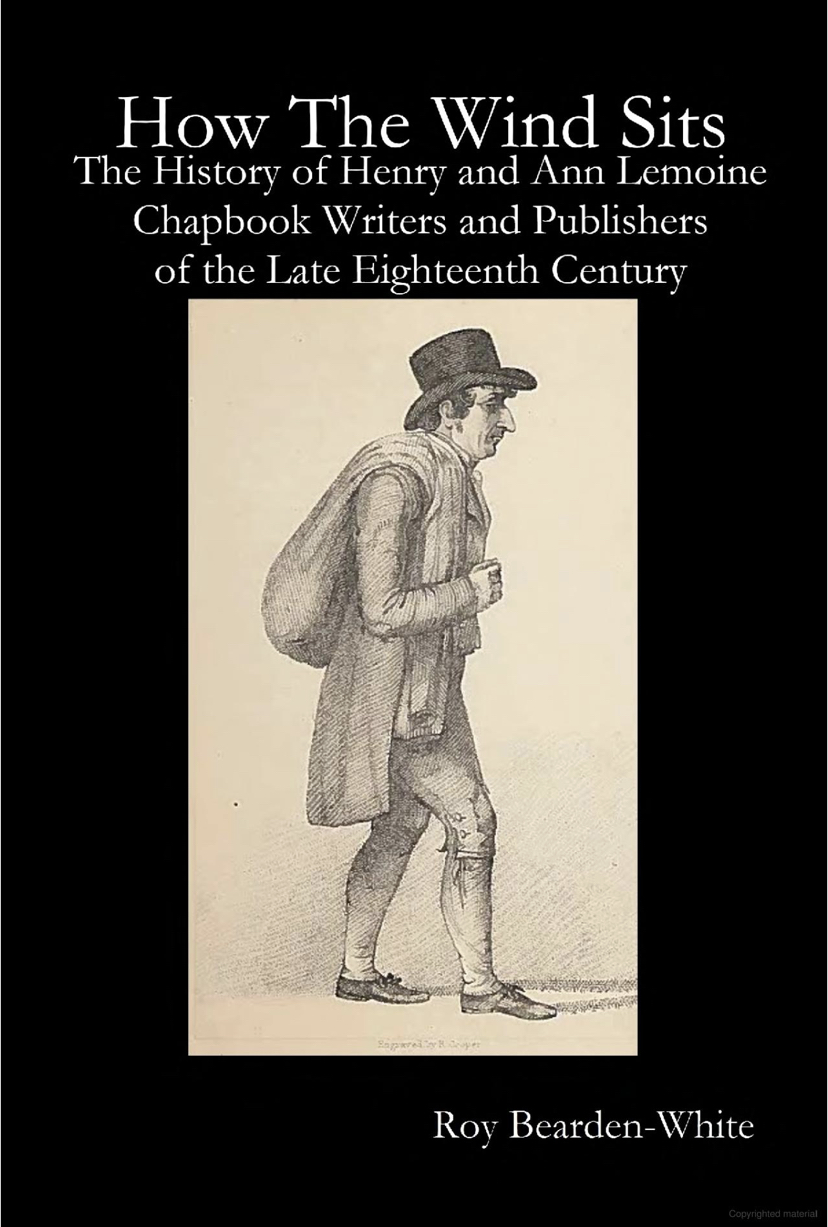 The cover of Roy Bearden’s White 2017 book based on his MA thesis features a famous illustration of Henry Lemoine from The New Wonderful Museum, and Extraordinary Magazine (1807), Bearden-White, 113.

Ann Lemoine’s (fl. 1795–1820) prosperity in the chapbook trade began with her necessity to provide for her two children after her husband’s bankruptcy. In 1786, Lemoine married Henry at the cusp of his career in the book trades. Known as a reputable printer and bookseller in London, Henry was eager to further increase his profits. Offering credit to customers was a routine gesture in the trade since “chapbook sellers depended upon either cash transactions or easily transferred barters” in order to conduct stable business (Bearden-White 53). In an unusual and risky move, Henry also extended credit to two fellow booksellers, who, in turn, could not pay their dues. Unable to insure his losses, Henry was sent to debtor’s prison in 1794 (Bearden-White 54).

In 1795, Lemoine embarked on her publishing career to “became the first fully independent female publisher in England” (Bearden-White 56). Originally from a low social station, the Lemoines operated outside of the mainstream book industry. As a result of growing literacy rates, street literature, which generally took the form of small hastily-bound booklets constructed from sheets of paper, known as chapbooks, began to be published in greater numbers and were disseminated among Britain’s lower-middle class. The contents of chapbooks varied greatly, and often reflected the thoughts, activites, hobbies, and traditions of working-class men and women (Bearden-White 40).

In an effort to expand and improve the options available to her lower income audience, Lemoine “rejected the traditional model of the chapbook trade and experimented with different approaches to design” and, by 1820, had published at least four-hundred works, including those written anonymously by her husband (Bearden-White 56). Based in White-Rose-Court, London, she often employed printer Thomas Maiden, publisher John Roe, and bookseller Thomas Hurst to help carry out her vision.

Imprint from The Brazier's Daughter; Or, History of Ethelred and Ethelgive: An Historic Romance (1803), Google Books, https://books.google.ca/books?id=HmaR6yC9Y64C.

Possessing a relatively unprecedented understanding of her consumers desires, Lemoine greatly advanced the chapbook industry. Rather than sustain the lengthy titles that were once a trademark of the eighteenth-century novel, she shortened chapbook titles to gauge the audience’s interest without revealing the entire plot. In doing so, Lemoine engineered a new form of marketing for chapbooks.

The Life of Charlotte Du Pont, an English lady; taken from her own memoirs: giving an account how she was trepan'd by her stepmother to Virginia, how the ship was taken by some Madagascar pirates and retaken by a Spanish man of war, of her marriage in the Spanish West-Indies and adventures whilst she resided there, with her return to England; and, the history of several gentlemen and ladies whom she met withal in her travels, some of whom had been slaves in Barbary and others cast on shore by shipwreck on the barbarous coasts up the great river Oroonoko, with their escape thence and safe return to France and Spain: a history that contains the greatest variety of events that ever was published.

The Life, Adventures and Distresses of Charlotte Dupont, and Her Lover Belanger; Who, It is Supposed, Underwent a Greater Variety of Real Misfortunes, and Miraculous Adventures, Than Any Couple That Ever Existed.

Updating the chapbook format further, Lemoine embellished her books with detailed illustrations to emulate the presentation of more expensive books, possibly as a result of Henry’s decision to purchase a copper-plate printing business before his imprisonment (Bearden-White 69). Although a costly investment, copper allowed for frontispiece etchings to appear life-like, appealing to a broader range of consumers. Her 1802 book, The Black Forest, is one example of a high-quality copper-plate illustration that was not usually found in chapbooks. By adding a frontispiece––an illustration before the title page––to her chapbooks, Lemoine was able to produce attractive and appealing chapbooks at a portion of a book’s usual cost. 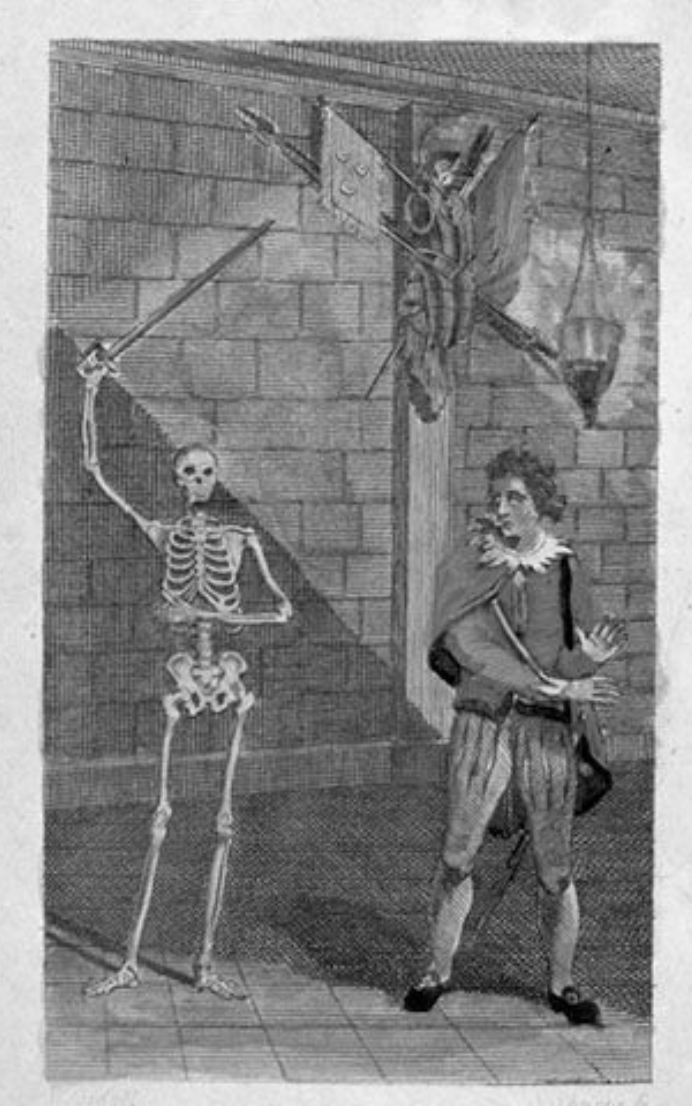 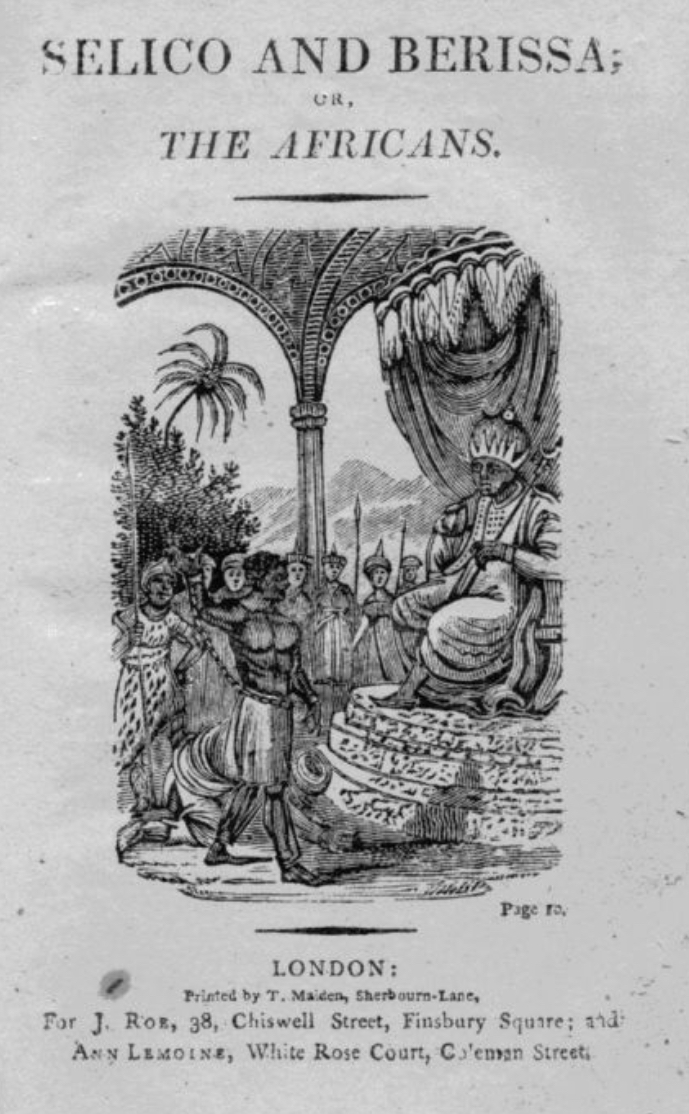 Frontispiece of Selico and Berissa; Or, The Africans (c.1806). Bearden-White notes the intricate detail of the drapery, 121.

While perusing through the Special Collections of The Bibliothèque nationale de France (as one does on a sunny afternoon in Paris), RA Sara Penn, came across Ann Radcliffe’s Mysteries of Udolpho (1794) before it was published by Lemoine a year later. Apparently unfamiliar with taking photos, Sara placed the book weight over the details of the imprint (which in this case names G. G and J Robinson as publishers). Sadly, there is no illustrative record of Lemoine’s version to compare, but it would likely feature a frontispiece. Photo by Sara Penn, July 2019.

Rather than strictly publish tracts of romance or religion, Lemoine also ensured a wide-range of subject matter for her readers. As Michelle Levy points out, “Lemoine appears to have actively curated her list to include titles that take marginalized and eccentric women as their subjects” (5) by publishing texts of sex work, female robbers, and women in polyandrous relationships. Levy also notes that Lemoine’s “publications were unusually explicit in addressing [prostitution]” (6) as seen in The Magdalen, Or, History of the First Penitent Prostitute Received Into that Charitable Asylum (1799).

Title page of The Magdalen, Or, History of the First Penitent Prostitute Received Into that Charitable Asylum (1799).

The Life. Adventures, and Distresses of Charlotte Du Pont…(title)

The Fair Wanderer; or, The History of Caroline Dormer, A Reformed Prostitute, Written by Herself. In Which is Introduced, Lucy of Leinster; A Pathetic Tale. (title on sex work)

The Wife of Two Husbands; or, Fritz, the Outlaw. An Interesting Tale. (title on a woman in a polyandrous relationship)

The Magdalen; or, History of the First Penitent Prostitute Received Into That Charitable Asylum. With Anecdotes of Other Penitents. By the Rev. William Dodd, LL. D. (title)

Bearden-White, Roy. How the Wind Sits; or, the History of Henry and Ann Lemoine, Chapbook Writers and Publishers of the Late Eighteenth Century. 2007. Southern Illinois University Carbondale, M.A. Thesis.

Levy, Michelle. “Female Booksellers at the End of the Long Eighteenth Century.” Women in Book History, 1660-1836, special issue of The Huntington Library Quarterly, edited by Betty A. Schellenberg and Michelle Levy, March 2021, forthcoming.