Episode 7, "The Business of Gossip"

Dearest readers, Reputation is, as they say, everything. The lack of a reputation for some will be their ruin: a young lady if caught unchaperoned, a respectable name if a child is born out of wedlock, a young man if too reckless while gambling. But for others, it seems, no... 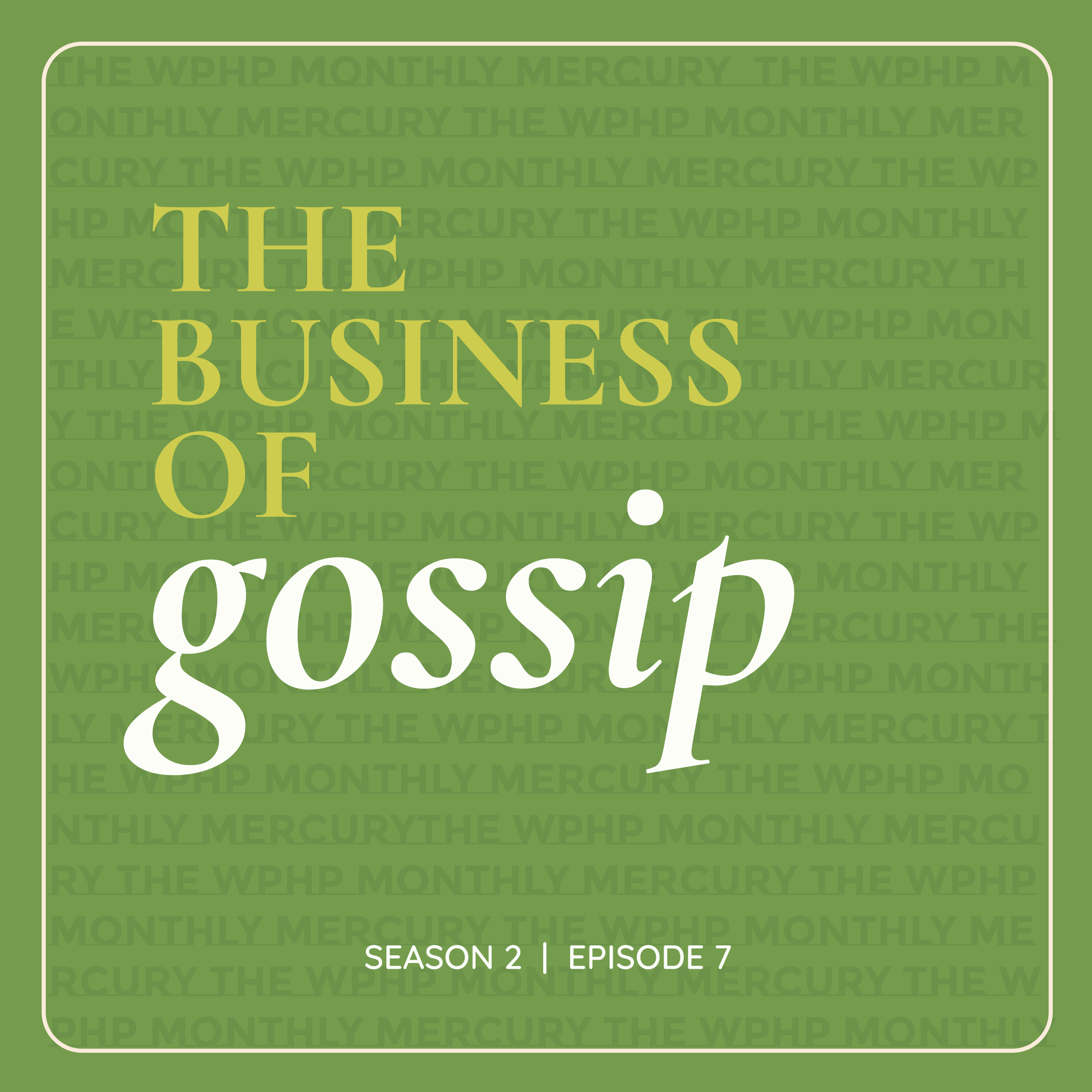 You can listen to Episode 7 of Season 2 of The WPHP Monthly Mercury, "The Business of Gossip", on Apple, Spotify, Stitcher, Google Podcasts, and other podcast apps, available via Buzzsprout.

Reputation is, as they say, everything. The lack of a reputation for some will be their ruin: a young lady if caught unchaperoned, a respectable name if a child is born out of wedlock, a young man if too reckless while gambling. But for others, it seems, no publicity is bad publicity.

One such businessman appears to be taking such an approach with his own reputation, indeed: a Mister H— C— has shocked and astonished society over the last thirty years, rising to the top of the publishing world only to fall to its depths in debts—and then regain his fortune once again. A veritable Phoenix, this Mr. H— C—.

It appears, however, that our Mr. C— has recently departed for Windsor, and rumours abound about what, pray tell, may have forced him to abscond: has new information surfaced about his parentage—are we finally to receive confirmation that his father is indeed Lord Lansdowne? Or perhaps even the Duke of York, as some insist? Did one of his agreements with an aristocratic author finally go dreadfully awry? Lady Morgan, as we all know, recently abandoned Mr. C— to take up with his rivals and former protégés, Messrs Saunders and Otley. A Mr. John Sutherland has been heard to declare the three of them “all vipers warmed in the Colburn bosom,” though we cannot, unfortunately, corroborate this statement. We can confirm, however, that Mr. C— responded, shall we say, indelicately. A young boy in short pants being denied his favourite sweet comes to mind.

Whatever the reason for Mr. C—’s sudden departure, we wait with bated breath for what will certainly be a remarkable return to London by the Phoenix of the publishing world; what admittedly brilliant works might he bring us when he is next able to spread his wings?

The Ladies of the WPHP Monthly Mercury

In Episode 7 of Season 2 of The WPHP Monthly Mercury, “The Business of Gossip,” hosts Kate and Kandice follow the highly successful Henry Colburn, leading publisher of fiction in the early nineteenth century, across his three main business addresses in London—and in so doing, explore how the publisher prompted, encouraged, and engaged with gossip.

The source of much gossip himself, Colburn’s origins are unknown (although rumoured to be noble), his less-savoury business practices are disparaged by his partners (with good reason), and his reputation, even into scholarship until very recently, is extremely poor. Drawing on research from John Sutherland and Veronica Melnyk, this episode explores the timeline of Colburn’s 47-year career and how, exactly, certain narratives about him were established, and have since been corrected.

Featuring such authors as Sydney, Lady Morgan, Lady Caroline Lamb, and Letitia Elizabeth Landon, and such publishers and book trades members as Saunders and Otley, and Richard Bentley, we traipse through the landscape of Colburn’s publishing practice as it moved through London (and, briefly, Windsor), sharing what each new address wrought or signified for the publisher and what such considerations of business and gossip might tell us about the role of gossip in the book trades more generally.

A Marriage in High Life (title)

​​Copeland, Edward. The Silver Fork Novel: Fashionable Fiction in the Age of Reform. Cambridge UP, 2012.

Garside, Peter. “The English Novel in the Romantic Era.” The English Novel 1770–1829: A Bibliographical Survey of Prose Fiction Published in the British Isles. Edited by Peter Garside, James Raven, and Rainer Schöwerling. Vol. 2. Oxford UP, 2000, 15–103.

Mason, Nicholas. Literary Advertising and the Shaping of British Romanticism. John Hopkins UP, 2013.

Melnyk, Veronica. ‘Half Fashion and Half Passion’: The Life of Publisher Henry Colburn. p. 247.

Sutherland, John and Veronica Melnyk. Rogue Publisher, The “Prince of Puffers”: The Life and Works of the Publisher Henry Colburn. 2018.

Sadleir, Michael. XIX Century Fiction: A Bibliographical Record Based on his Own Collection. 2 vols. California UP, 1951.