A New System of Domestic Cookery: 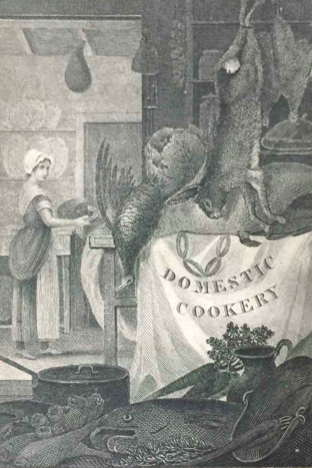 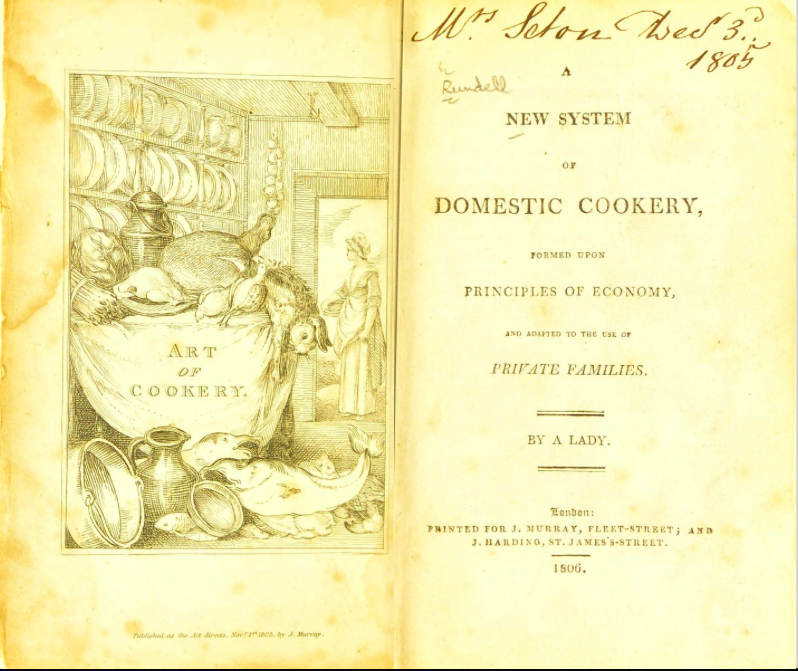 The First Edition of A New System of Domestic Cookery, formed upon principles of economy, and adapted to the uses of private families, by Maria Rundell, signed “by a lady”

John Murray II (1778–1843), a fashionable West End publisher, is best known as the publisher of Lord Byron and of Jane Austen’s last four novels. Murray, however, also published dozens of women writers, though there is one female author who is most responsible for the financial success of his house. This woman is Maria Eliza Rundell (1745–1828) and the book she published with Murray was her 1806 New System of Domestic Cookery, formed upon principles of economy, and adapted to the uses of private families. Indeed, Murray’s purchase of his premises in Mayfair, at 50 Albermarle Street, for £4,000 in 1812, was dependent upon the immediate and enduring success of this one book. Murray was encouraged by his early association with Lord Byron: the first work Byron published with Murray, Childe Harold’s Pilgrimage, Cantos I and II, appeared in 1812, after which Byron claimed “I awoke one morning, and found myself famous.”  But the actual financial security for the Albermarle property was two copyrights: one for Scott’s Marmion and the other for Maria Rundell’s Domestic Cookery. Rundell’s cookbook was almost certainly Murray’s most valuable property. You can see a digital copy of the first edition from archive.org, here and the title page and frontispiece from this edition, above.

Rundell’s book appeared more than five decades after Hannah Glasse’s highly successful The Art of Cookery, Made Plain and Easy, which first appeared in 1747. Rundell offered an updated and complete manual household management, going far beyond recipes for food (though there are more than a thousand of these, including the preparation of all kinds of fish, meat, and vegetables, as well as instructions on baking, brewing, pickling and preserving). It offered many domestic tips, from food storage to serving, as well as formulas for making home remedies for various ailments. In a section called “cookery for the sick,” Rundell includes many recipes for various kinds of broth, caudle (a thickened and sweetened hot drink, like eggnog) and herbal remedies. Elsewhere, in a section called “useful directions to give to servants,” she includes instructions for cleaning various household items. In her “Miscellaneous Observations for the use of the Mistress of the family; by which much money will be saved, and the general appearance greatly improved,” she offers sensible advice about avoiding waste, keeping track of expenditures, and paying up front “for all things as come not in weekly bills” (1806, ii). She advises thrift and economy, urging women to know “the comparative prices of provisions, in order that she may be able to substitute those that are most reasonable, when they will answer as well, for others of the same kind, but which are more costly” (1806, ii). And Rundell offers other sound advice—which we are sadly not beyond need of—recommending that her readers weigh their goods at home to ensure they have been given what they paid for, “though it is very disagreeable to suspect anyone’s honesty, and perhaps mistakes have been unintentional” (1806, iii).

Domestic Cookery was never out of print during Rundell’s or Murray II’s lifetimes, and was constantly expanded and reprinted, first by Rundell and by others after her death in 1828. By 1835, the “fifty-eighth edition” was published, this one with a “new chapter on french cookery.” With 58 editions in 29 years, it would appear that, on average, editions were published twice yearly for nearly three decades. With 5,000 to 10,000 copies printed annually (the 59th edition in 1837 sold 6,000 copies alone (Somerville 177), Domestic Cookery was without a doubt John Murray II’s most reprinted work.  John Murray III (John Murray II's son) continued to publish the book upon his father’s death in 1843 though it appears the final publication by the Murray house was the 68th edition of 1845, the title page of which can be seen below. 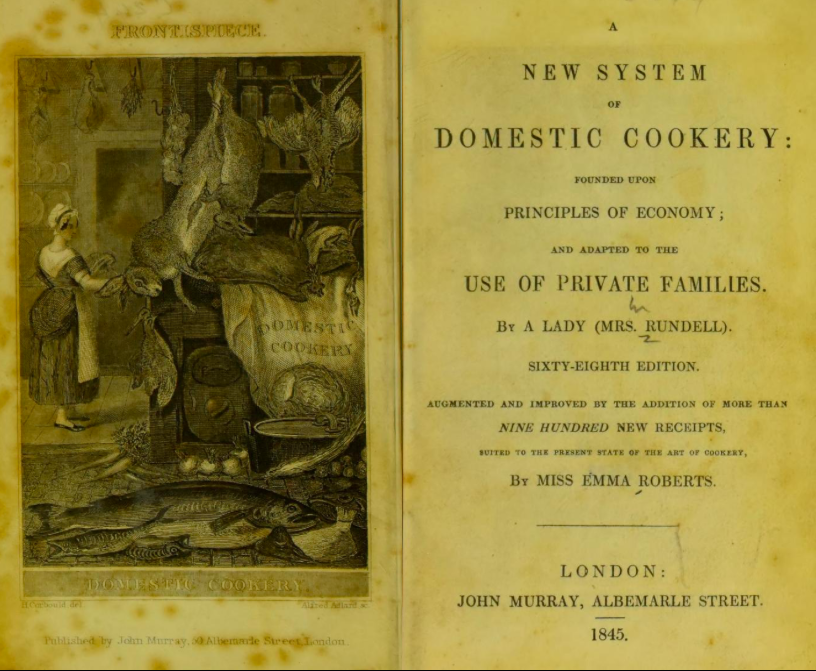 The Sixty-eighth edition of A New System of Domestic Cookery, now signed "by a Lady (Mrs. Rundell)" and augmented and improved by Miss Emma Roberts.

In addition to being the most reprinted of his publications, it seems unlikely that any other single title could have made Murray more profit than Domestic Cookery. One of the reasons for this is that Rundell, a family friend, had given the copyright to Murray as a “free gift” (Smiles, 2.121). In the advertisement of the first and many subsequent editions, the author describes her reasons for accepting nothing for the book, which was intended for “the use of private families":

This little work would have been a treasure to herself, when she first set out in life, and she hopes it will be useful to others. In that idea it is given to the public, and as she will receive from it no emolument, so she trusts it will escape without censure.

However, in 1808, Murray, perhaps feeling guilty that his author had made nothing from the sale of a book when he had already made so much, presented her with a gift of £150; she replied that the copyright had been a free gift, and asked for no further payment. In 1814, however, she had a change of heart. She alleged that Murray was neglecting the sale of the book, though of course it was in his interest to promote it (and indeed he appeared always to have done so). A lengthy legal battle ensured, with Rundell finally accepting Murray’s offer of £2,000 in full discharge of all her claims in 1823. His dealings with Rundell demonstrate the challenges in mixing friendship and business, an entanglement that does not appear to have been fully satisfactory to either party, although it made Murray (and ultimately, Rundell), a considerable fortune.

For those interested in attempting one of Rundell’s recipes, here is one for making and storing vegan gingerbread, or as she puts it, “To make a good Gingerbread, without butter” (1806, 226). 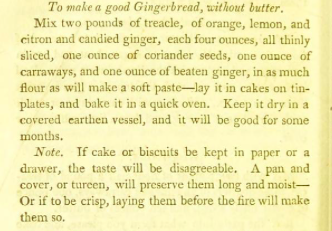 And here are her instructions for how “well-made,” early-19th century coffee was to be prepared (1806, Advertisement, 259): 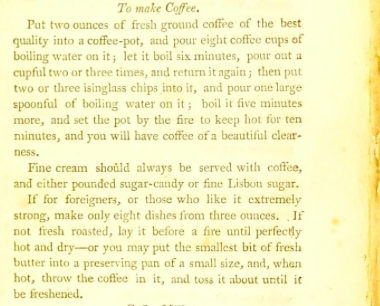 Should you wish to have your own copy, the 1816 edition has been reprinted by Persephone Books.

Rundell, Maria. A New System of Domestic Cookery, formed upon principles of economy, and adapted to the uses of private families. London, Murray and Parker, 1806.

Smiles, Samuel. A Publisher and His Friends: Memoir and Correspondence of the Late John Murray. London, Murray, 1891, 2 vols.