Martha Gurney (1733–1816) was an abolitionist Baptist bookseller and printer, who operated a bookshop at No. 128 Holborn Hill (adjacent to Leather Lane and just opposite Fetter Lane, between Gray’s Inn Road and Hatton Garden) from the late 1780s to her death in 1816 (Whelan, “William” 399).  No. 128 Holborn had been the premises of another bookseller, William Fox, since 1777; he joined forces with Martha Gurney in 1782, after which they published many pamphlets together, usually with her listed as bookseller, him as author. From 1782 to 1816, Gurney’s name appeared on over 100 imprints, chiefly as a seller but occasionally as printer of radical pamphlets, many focused on ending Britian’s invovlement in the Atlantic slave trade.

Gurney was the only daughter of Thomas Gurney, who had invented a system of shorthand, which he branded “Brachgraphy” and described in a book of that name, reprinted by Martha and her brother Joseph many times; Joseph learned shorthand from her father and became the leading shorthand court reporter of the day. Sister and brother published over 80 criminal trial reports, including some of the most controversial (such The whole proceedings on the trial of an information exhibited ex officio by the king’s attorney-general against Thomas Paine). 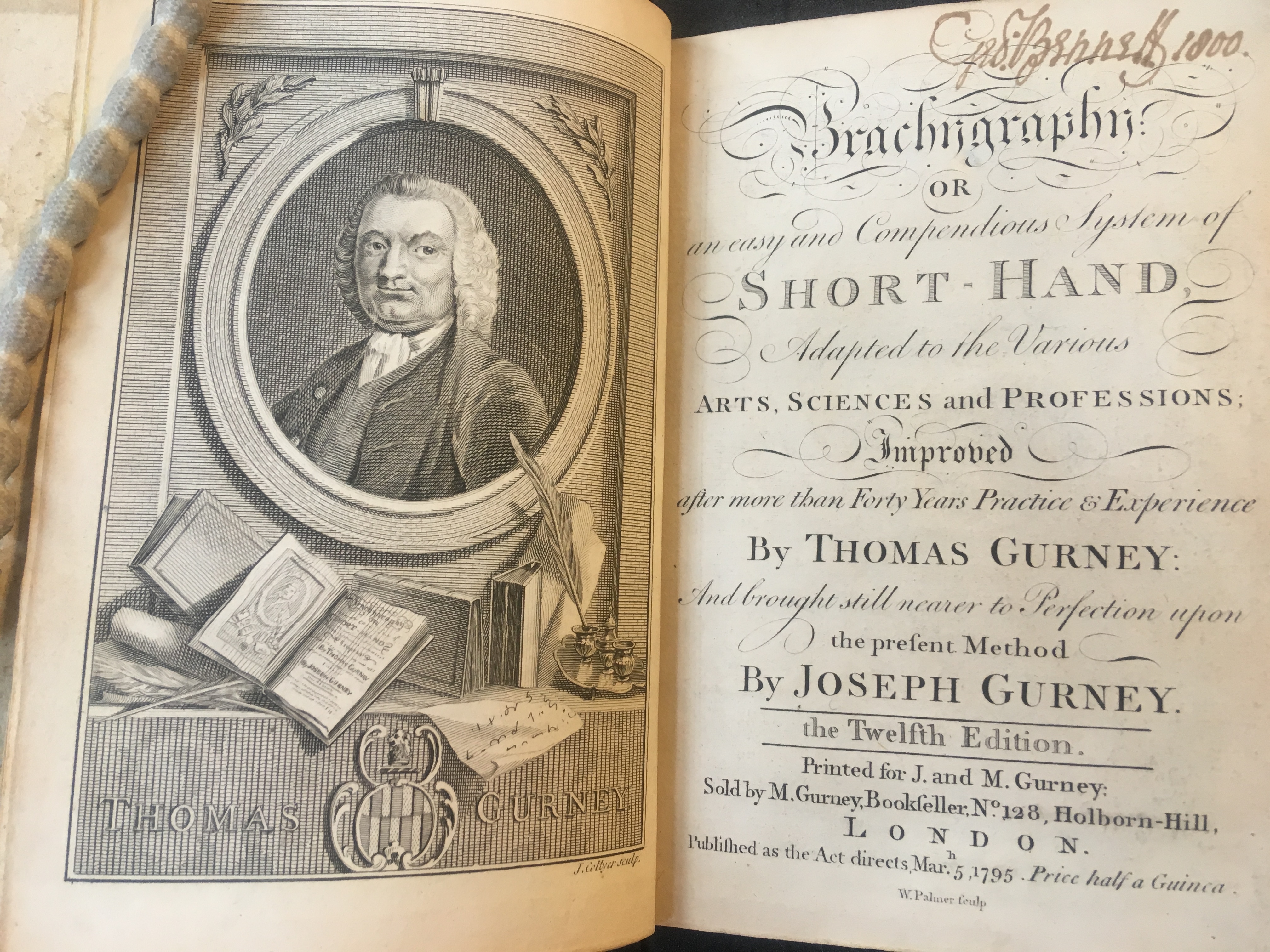 Gurney’s shop at No. 128 Holborn Hill sold pamphlets on a range of political and religious topics. A typical catalogue may be seen below, where we see the sale of works written by dissenters on other topics, ranging from the war with France to the East India Charter. Gurney’s bookshop was a center for the discussion and dissemination of radical writing in London at the turn of the century. However, as the first two titles make clear, Gurney chiefly was a publisher of anti-slavery literature, and her shop became a hub of anti-slavery activism; we know that she displayed a large fold-out woodcut of the slave ship Brookes, demonstrating the inhumane conditions in which slaves were transported across the Atlantic. 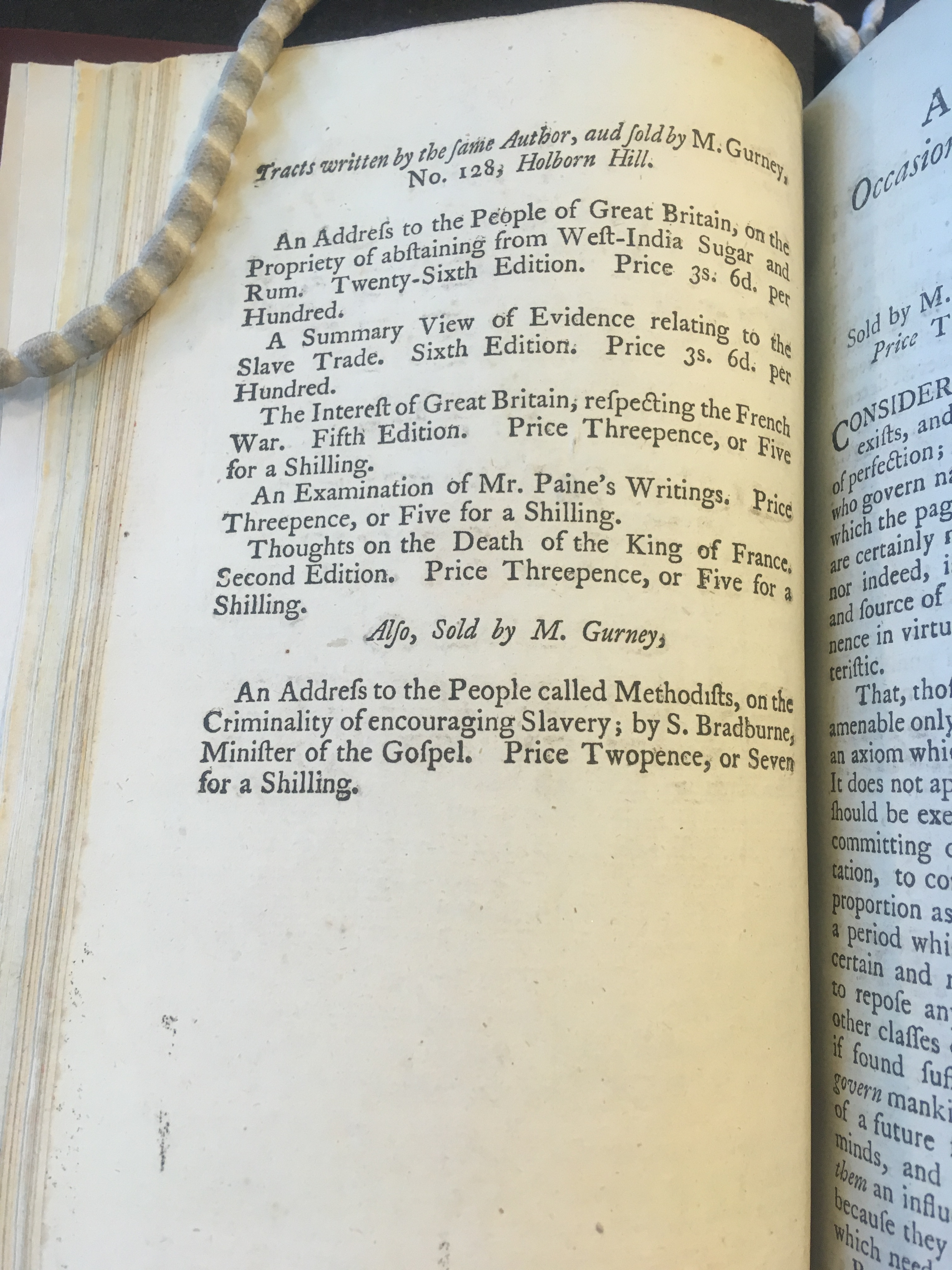 Martha Gurney’s greatest influence was as a publisher of anti-abolition pamphlets. According to Timothy Whelan—the scholar who has done considerable research uncovering her legacy—Gurney sold, printed and/or published sixteen anti-slavery pamphlets, most of them written by Fox, during the height of the first wave of abolitionist activism, between 1788 and 1794. Although many female authors advocated for the abolition of the slave trade through their poems and pamphlets, Martha Gurney is the only female printer/bookseller that has come to light who printed/sold tracts in opposition to the slave trade. Furthermore, according to Whelan, her name appears in the imprint of more pamphlets than any other women in the second half of the eighteenth century (“Martha” 50). Nevertheless, as Whelan observes, notwithstanding her role as an activist bookseller, she remains “largely unknown today” (“Martha” 45). 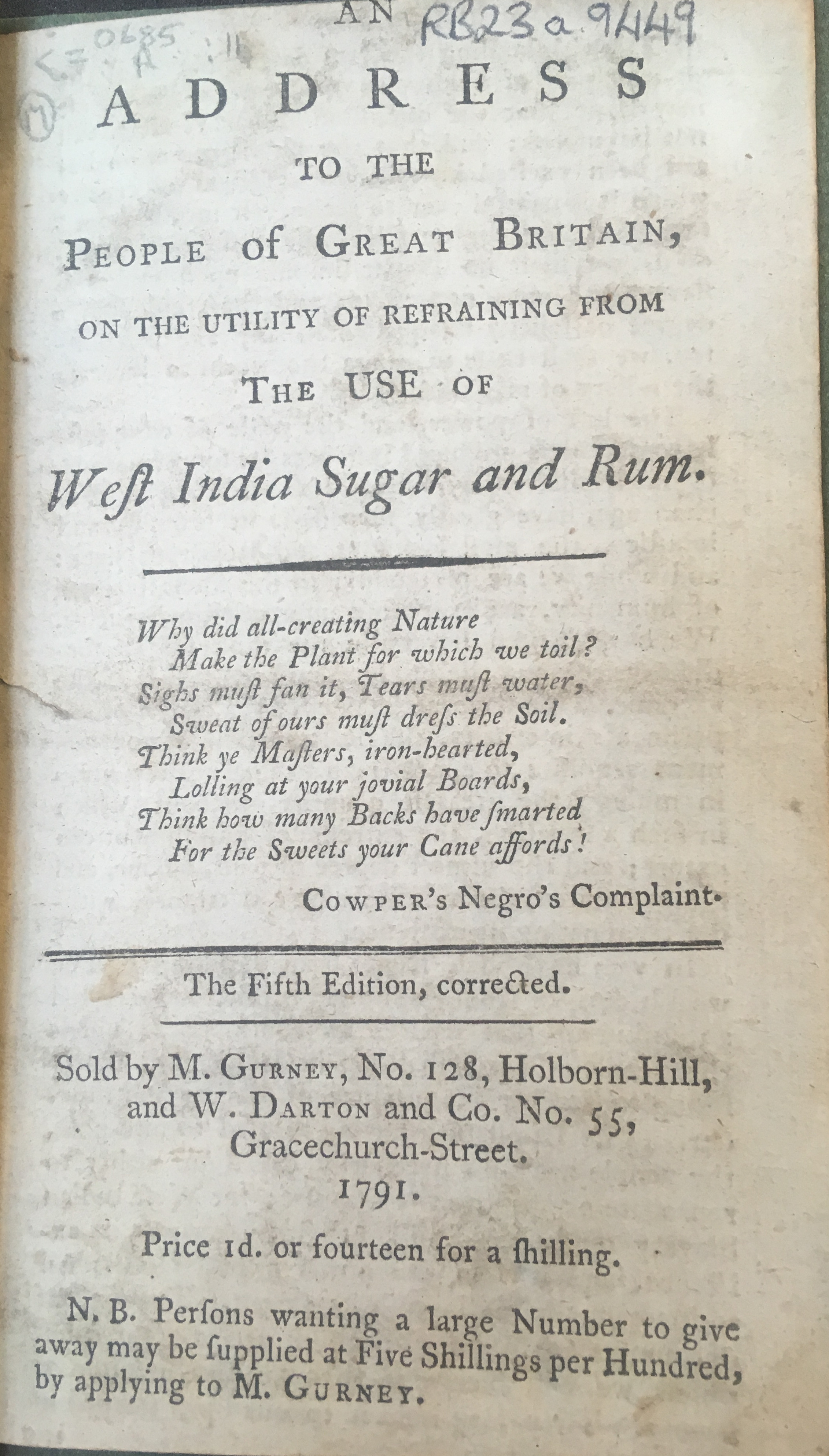 Gurney usually signed herself as a bookseller, as we see in this pamphlet—the most significant of Gurney’s abolition publications—Fox’s 12-page pamphlet, An Address to the People of Great Britain, on the Utility of Abstaining from the use of West India Sugar and Rum, first printed in 1791, with the fifth edition also printed in 1791. This was the first and most influential essay to advocate for a boycott of West Indian products, especially sugar and rum, and the pamphlet became hugely popular, going through twenty-six editions in one year to become one of if not “the most widely distributed pamphlet of the eighteenth century, with approximately 200,000 copies sold or given away” (Whelan, “Martha” 75). As may be seen on the title page to the 5th edition, Gurney sold these pamphlets so inexpensively that they approached free print: she advertised the very inexpensive price of one pence per copy and offered bulk discounts, advertising fourteen for a shilling or 100 for 5 shillings for “Persons wanting a large Number to give away.” She attached a note to the tenth edition to the effect that 50,000 copies of the pamphlet had been printed in the first four months of circulation. A note in the thirteenth edition explains that to further the boycott—and speed the eradication of the slave trade—“a trivial price is affixed, that those who approve the Pamphlet may be more generally enabled to promote its circulation” (Whelan, “Martha” 57). By the 25th edition, the price had fallen to a half penny. The many reprintings of the Address were followed by other anti-slavery pamphlets written by Fox and sold by Gurney. Given the ephemerality of these pamphlets, WPHP has found (and recorded) only a few; we need to add many more editions to our database. If you find an edition we do not have, please contact us.

Martha Gurney (firm, person)
Brachygraphy (title)
The whole proceedings on the trial of an information exhibited ex officio by the king’s attorney-general against Thomas Paine (title)
An Address to the People of Great Britain, on the Utility of Abstaining from the use of West India Sugar and Rum, fifth edition (title)