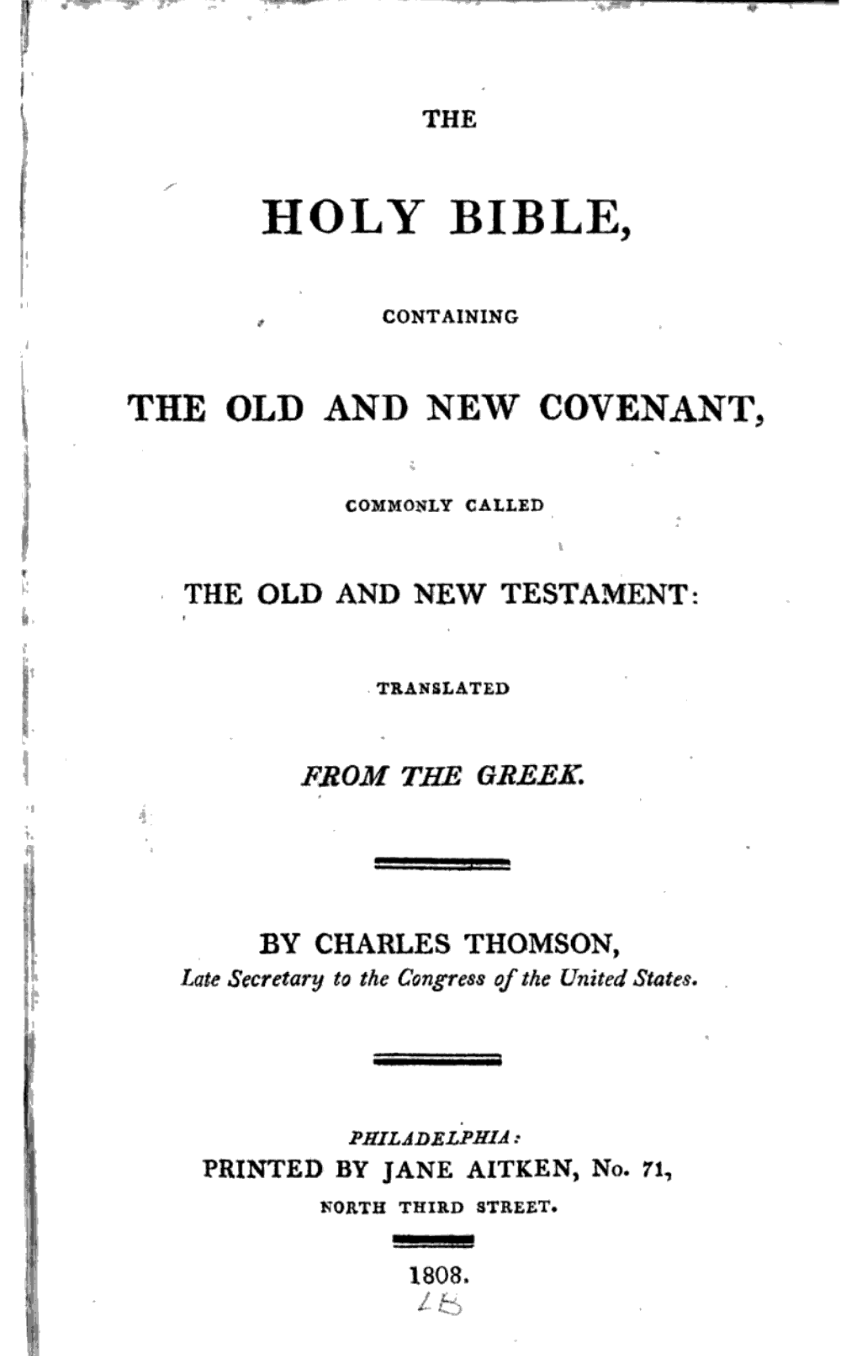 This post is part of our “Down the Rabbit Hole: Researching Women in the Book Trades” Spotlight Series, which will run through August 2022. This series seeks to make transparent some of the processes, challenges, and editorial choices our team has to make while falling down the inevitable rabbit holes involved in finding, and creating data for, women in the book trades.

Of the one hundred and sixteen titles the WPHP contains for American printer, publisher, bookseller, and bookbinder Jane Aitken (1764-1832), all but four contain imprints that identify Aitken as only the printer. While Aitken’s most common imprint—“Printed by Jane Aitken” followed by her address—provides us with information unavailable for many other women-run firms operating in the same period, specifically her full name and address, it does not supply the complete picture of Aitken’s labour behind each title. The four imprints that stand out identify Aitken as a publisher and bookseller, providing explicit evidence that she occupied these roles, and raising questions of what information is not visible when an imprint states only that a book was printed by Aitken. 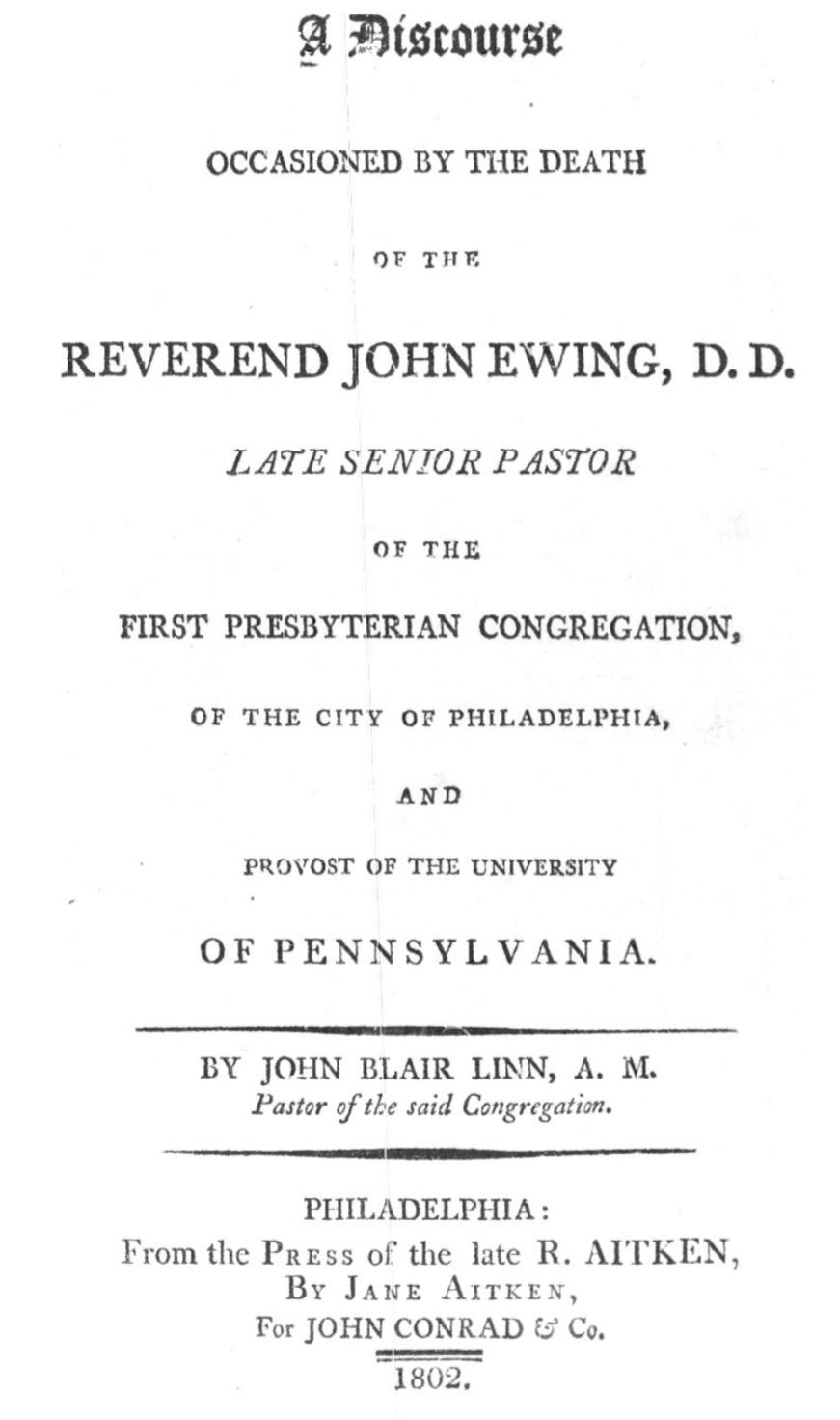 Figure 2. John Blair Linn. Title page of A discourse occasioned by the death of the Reverend John Ewing, D.D. 1802, AAS.

At her first location, No. 20 North Third Street, Philadelphia, from where she operated her business between 1802 and 1805, Aitken worked under three imprints. Most often, she utilized the aforementioned “Printed by Jane Aitken,” but occasionally imprints appeared as “From the press of the late R. Aitken, By Jane Aitken,” such as in Jon Blair Linn’s 1802 A discourse occasioned by the death of the Reverend John Ewing, D.D. Aitken inherited the printing and bookbinding business from her father, Robert Aitken, after his death in 1802. In Scotland, where Jane Aitken was born, Robert Aitken ran a stationer’s shop and circulating library, and continued working as a bookseller, printer, and bookbinder after relocating with his family to Philadelphia in 1771. Despite the fact that there is no indication of her involvement in his imprints, it is assumed Jane Aitken must have been involved in her father’s business before she officially inherited it—though for how long and in what capacity is unclear. The American Philosophical Society notes that “based on her own proficiency and the similarity and continuity of bookbinding and printing styles sustained long after her father’s death, Aitken must have learned the bookbinding and printing trades at an early age” (Jane Aitken Papers). In addition, the APS’s "Jane Aitken Papers" contain letters and accounts regarding Robert Aitken’s business in Jane Aitken’s handwriting. She eventually stopped operating in association with her father’s name at her second location (No. 62 North Third Street)—the last title printed by Jane Aitken with the imprint “from the press of the late R. Aitken” is James Janeway’s A Token for Children, published in 1806. 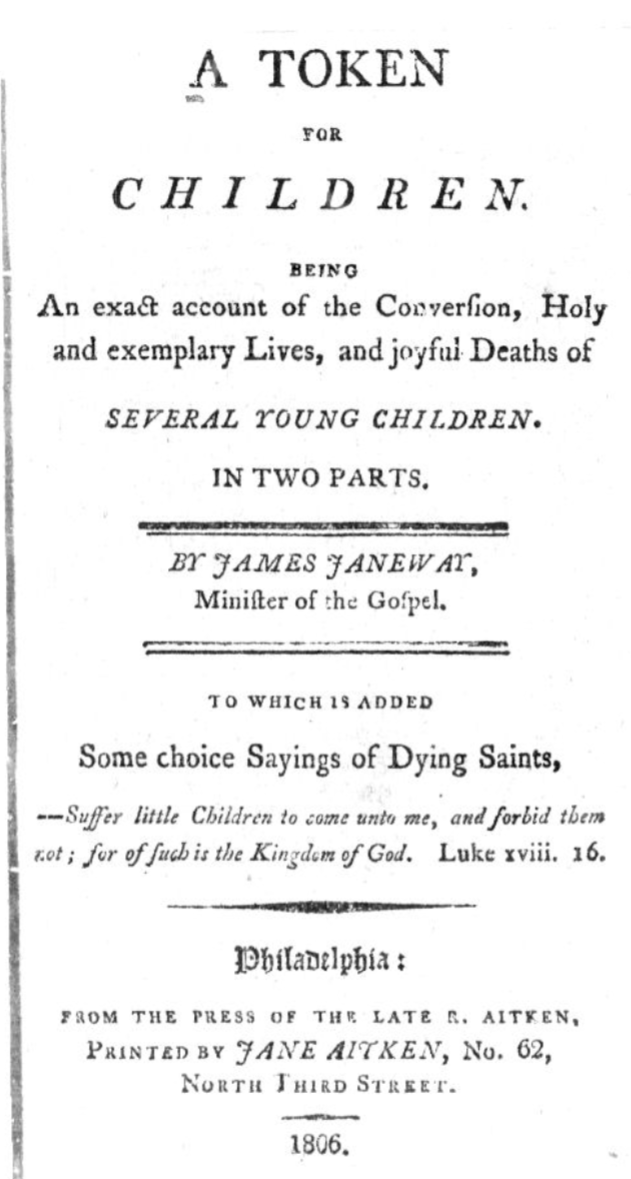 The imprint that associates Aitken with her father, however, identifies Aitken as solely a printer. At No. 20 North Third Street, Aitken printed a single title that gestures to the other aspects of the book trade in which she was involved: the 1803 Constitution of the Female Association of Philadelphia, for the Relief of Women and Children, in Reduced Circumstances. This imprint reads “Printed by Jane Aitken, bookseller and stationer, No. 20, North Third Street.” Without this one title, a survey of Aitken’s early imprints would suggest that she was only a printer. This begs the question of whether Aitken sold all the books she printed, despite this going unmentioned in her imprints. Furthermore, was she also the publisher of the books with imprints that only name her as a printer, and that do not name any publishers? An advertisement in the September 2, 1803 issue of the Aurora General Advertiser suggests this could be the case. The advertisement reads “Just published, and for sale by Jane Aitken, No 20, North Third Street, A Report of the case of the Commonwealth vs. Tench Coxe, Esq. in a motion on behalf of the Holland Company for a mandamus in the Supreme court.” The imprint of this 1803 title–“Printed by Jane Aitken, no. 20, north Third Street”–does not indicate that she published and sold it. The roles the Advertiser assigns to Aitken are absent from the imprint, demonstrating that Aitken did much more work in the production and sale of her books than is captured in her imprint data. 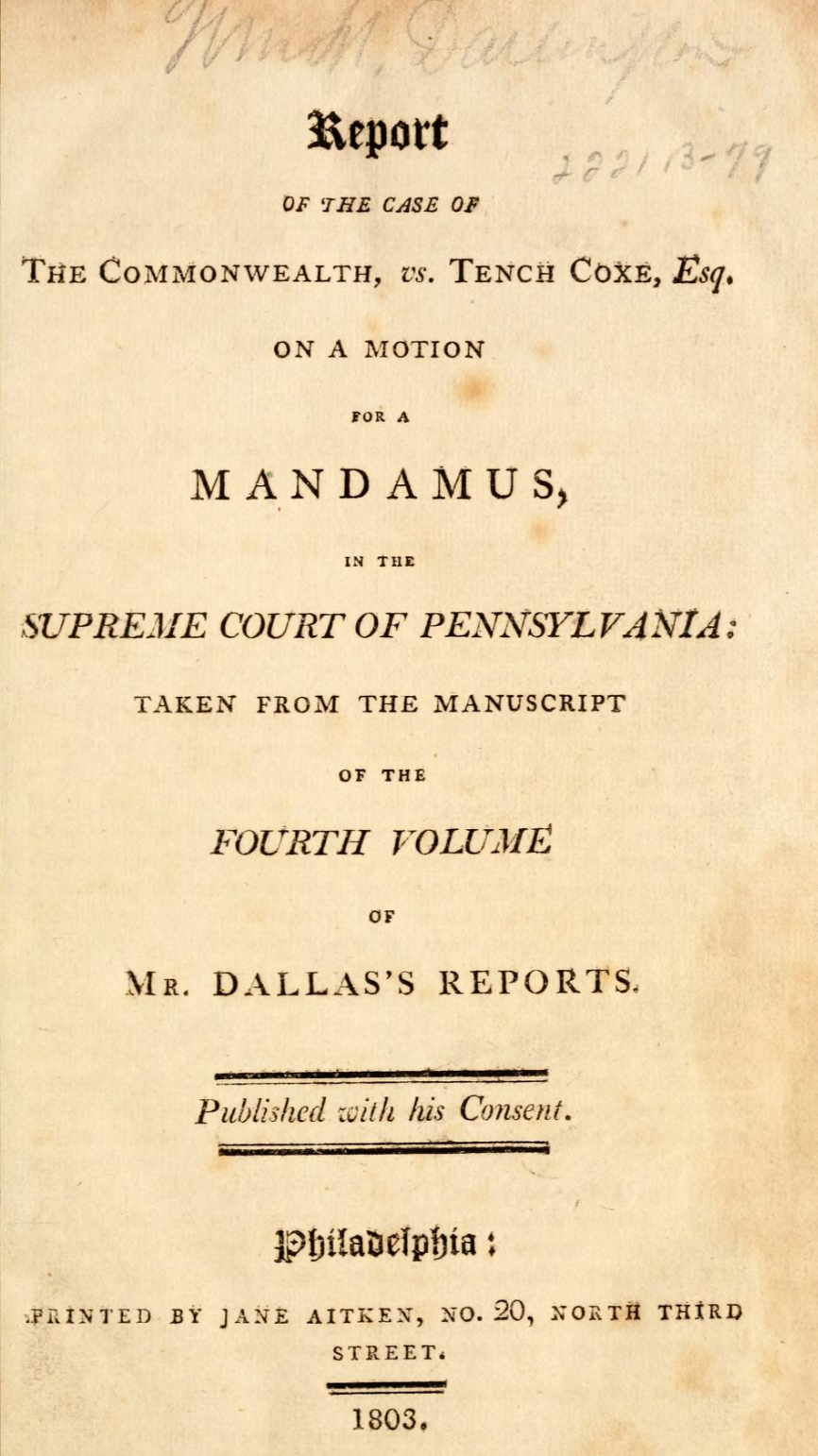 Figure 4. Alexander James Dallas. Title page of Report of the case of The Commonwealth, vs. Tench Coxe, Esq. on a motion for a Mandamus, in the Supreme Court of Pennsylvania. 1803, Archive.org. 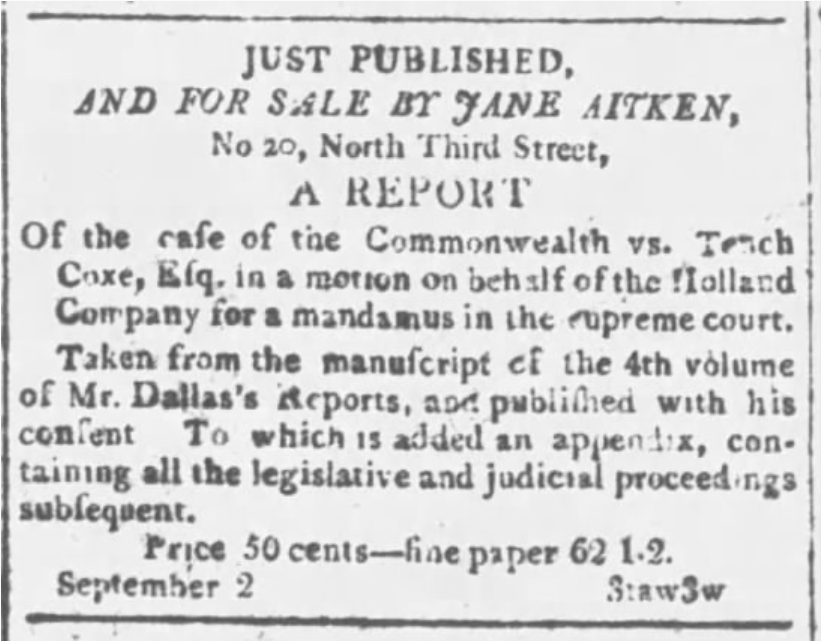 Figure 5. Advertisement in the September 2 issue of the Aurora General Advertiser. 1803, Newspapers.com.

Aitken’s three other unique imprints suggest similar patterns of data that are not visible in her regular imprints. She operated from her second location, No. 62 North Third Street, for a brief period from 1806 to 1807, and there, printed and sold Catechismi Westmonasteriensis minoris (1807) which has an imprint that states “Excudit Jana Aitken, apud quam prostat venale.” This is the only title at this location which contains an imprint that indicates Aitken did more than print publications and that she sold them as well. The February 10, 1807 issue of the Aurora General Advertiser further establishes her role as a bookseller at this location by referring to her business as “Miss Jane Aitken’s Book-store, No. 62, north Third street.” 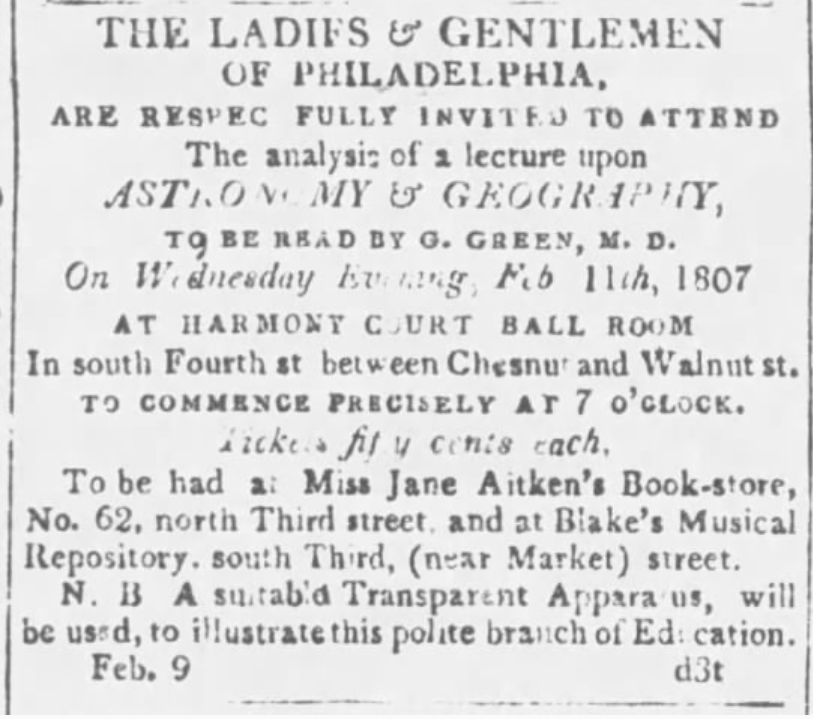 Figure 6. Advertisement in the February 10 issue of the Aurora General Advertiser. 1807, Newspapers.com.

At her last location, No. 71 North Third Street, where she worked from 1808 to 1813, she printed over half her titles. Here, Aitken printed one title with an imprint that attributed the printing and bookselling to herself, An Investigation of the Conduct and Proceedings of the Commissioners of Insolvents and their Secretary (1812) and an advertisement for Memoirs of the Philadelphia Society for Promoting Agriculture (Vol.I, Vol. II) that named her as the book’s publisher and bookseller. In the Memoirs itself, however, the imprint reads “Printed by Jane Aitken, No. 71, North Third Street.” Taken altogether, these four unique imprints and advertisements suggest that Aitken was not only a printer, but often a bookseller and publisher as well. 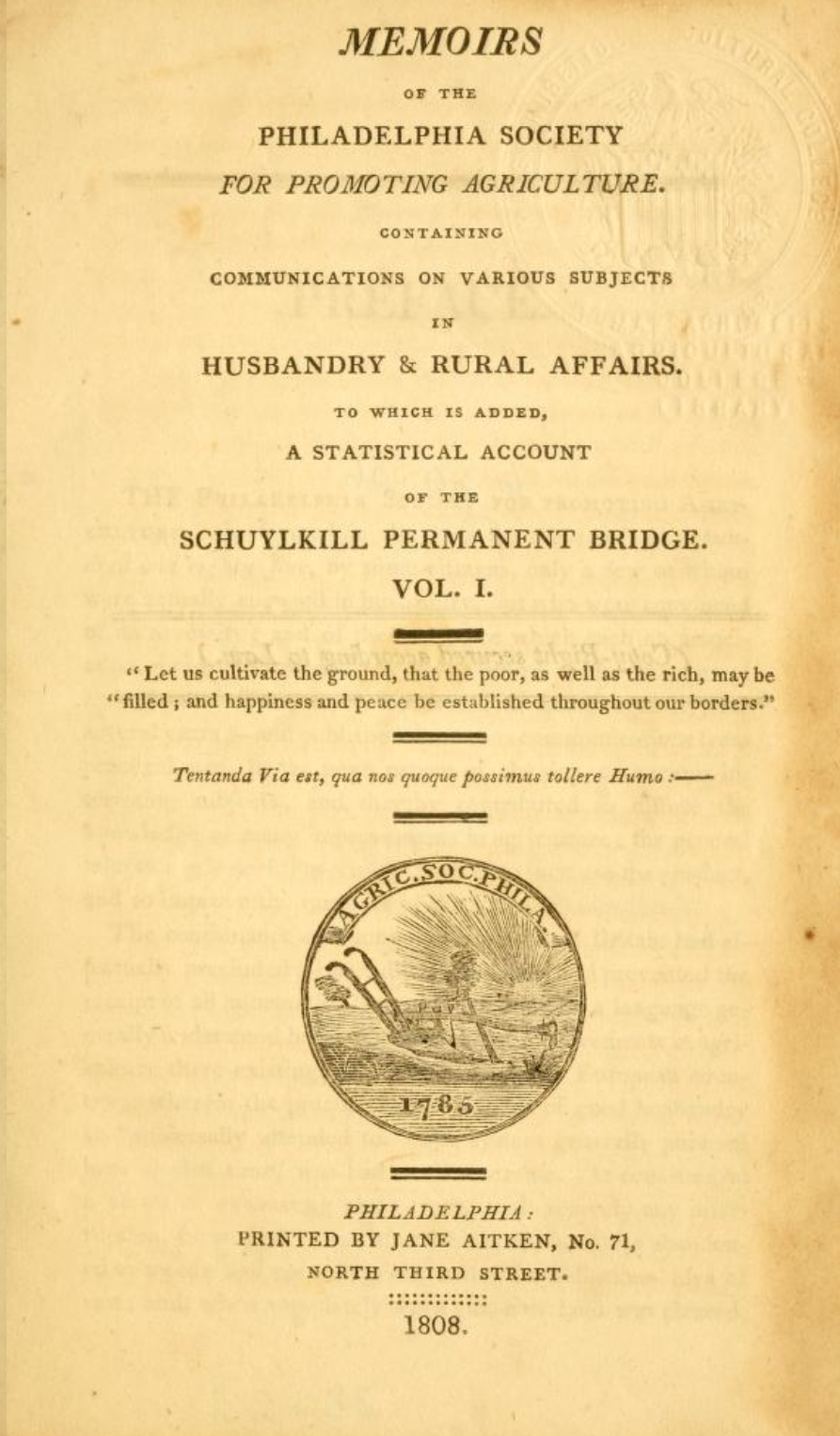 Figure 7. Title page of Memoirs of the Philadelphia Society for Promoting Agriculture, Vol. I. 1808, Archive.org.

Even more difficult to capture in our data is Aitken’s extensive book binding work. The APS states that “[t]he extant bound editions of her work include some four hundred volumes for the American Philosophical Society, a number of author's presentation copies of her imprints and the first receipt ledger for the Athenaeum of Philadelphia.” Additionally, Carol M. Spawn, citing a letter from Aitken to Ebenezer Hazard dated November 5, 1804, observes that Aitken “sometimes had to depend entirely on her bookbinding for support” (26), despite being such a prolific printer. This information suggests that bookbinding was lucrative and may have constituted a significant portion of Aitken’s business. The WPHP does not record bookbinding in our data because the digitizations we rely on to verify most of our titles do not include covers; nor are book binders identified in the imprint, as binding was often done after and apart from printing and selling. Binding is also copy-specific whereas we record our titles by edition. The American Antiquarian Society holds a copy of The Book of Common Prayer of which the binding is attributed to Aitken and the catalogue record of which can be viewed here.

Analyzing Aitken’s imprints demonstrates that while imprints are important for the information they can provide, they often do not supply the complete picture of a woman’s involvement in the book trades. It is only by looking at all the imprints as well as external sources such as advertisements and the physical copies of books that we get a better idea of the full scope of Aitken’s, and many other women’s, labour.

A discourse occasioned by the death of the Reverend John Ewing, D.D (title)

A Token for Children (title)

Constitution of the Female Association of Philadelphia, for the Relief of Women and Children, in Reduced Circumstances (title)

Report of the case of The Commonwealth, vs. Tench Coxe, Esq. on a motion for a Mandamus, in the Supreme Court of Pennsylvania (title)