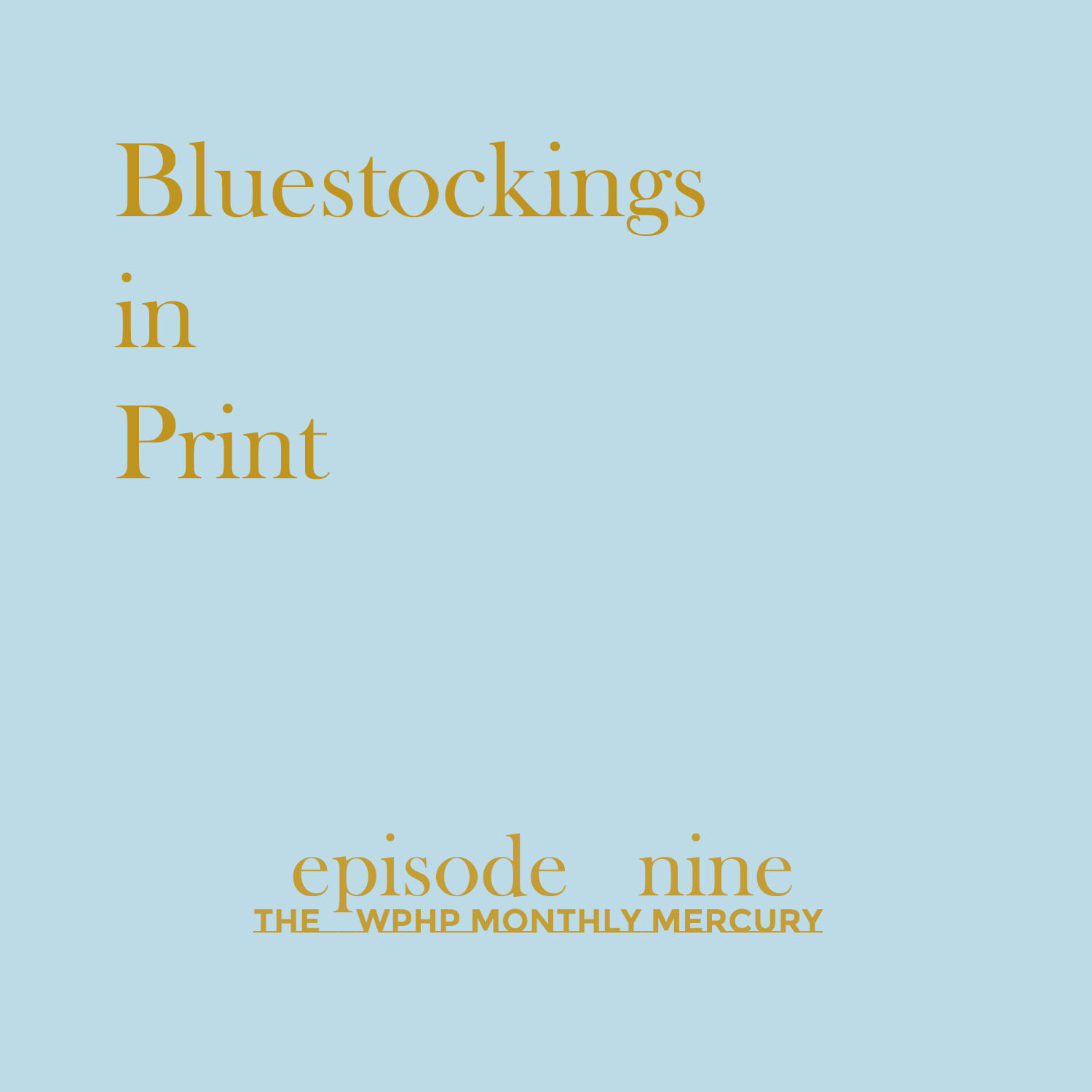 You can listen to Episode 9 of The WPHP Monthly Mercury, "Bluestockings in Print", on Apple, Spotify, Stitcher, Google Podcasts, and other podcast apps, available via Buzzsprout.

In the ninth episode of The WPHP Monthly Mercury, “Bluestockings in Print,” hosts Kate Moffatt and Kandice Sharren sit down with Bluestocking expert Betty Schellenberg to talk about this famous group of eighteenth-century men and women and their relationship to print — which is, as it turns out, as complex as the group itself.

Informal in both dress and attendance, the Bluestockings were an intellectual group of men and women whose famous gatherings focused on conversation and wit. Admittance was more likely due to the subjects you studied or the wit you boasted than your social status, although the three famous hostesses of these gatherings — Elizabeth Montagu, Frances Boscawen, and Elizabeth Vesey — all held significant social positions. With members across England and Ireland, the Bluestockings met to discuss many of the important intellectual conversations of the day; published in a range of genres, including classical translations, fiction, and educational letters; and sent and received more than 8000 letters, some of which were collected and published posthumously.

“Bluestockings in Print” examines the relationship between these ladies of wit and learning and publication. Betty Schellenberg illuminates the many overlapping stories that impacted their presence in print, whether it be as authors or in dedications and subscriber’s lists (and explains the significance of “blue stockings!”).

A big thank you to Dr. Betty Schellenberg for joining us for this episode of The WPHP Monthly Mercury! Betty Schellenberg is a Professor of English at Simon Fraser University. Her interests in authorship, the Bluestocking movement, and interfaces between the print trade and scribal networks inform her publications, which include Literary Coteries and the Making of Modern Print Culture (2016), The Professionalization of Women Writers in Eighteenth-Century Britain (2005), and Reconsidering the Bluestockings, co-edited with Nicole Pohl (2003). She is currently researching the eighteenth-century manuscript poetry miscellany and editing Elizabeth Montagu’s correspondence with the Duchess of Portland for the Elizabeth Montague Correspondence Online digital project. And, like Elizabeth Carter, she loves long-distance walking, although Samuel Johnson would not have complimented her on her talents at sewing shirts and making puddings.

WPHP records in the order they are referenced:

A Series of Letters between Mrs. Elizabeth Carter and Miss Catherine Talbot, from the year 1741 to 1770. (title)

Letters on the Improvement of the Mind (title)

A description of Millenium Hall, and the country adjacent (title)

Evelina, or, a young lady's entrance into the world (title)

Camilla: or, a picture of youth (title)

The History of George Ellison (title)

Florio: a tale, for fine gentlemen and fine ladies: and, The Bas Bleu; or, conversation: two poems (title)

All the works of Epictetus (title)

Hurley, Alison E. "A Conversation of Their Own: Watering-Place Correspondence Among the Bluestockings."
Eighteenth-Century Studies, 2006, Vol.40 (1), p. 1-21.