The Woman of Colour: 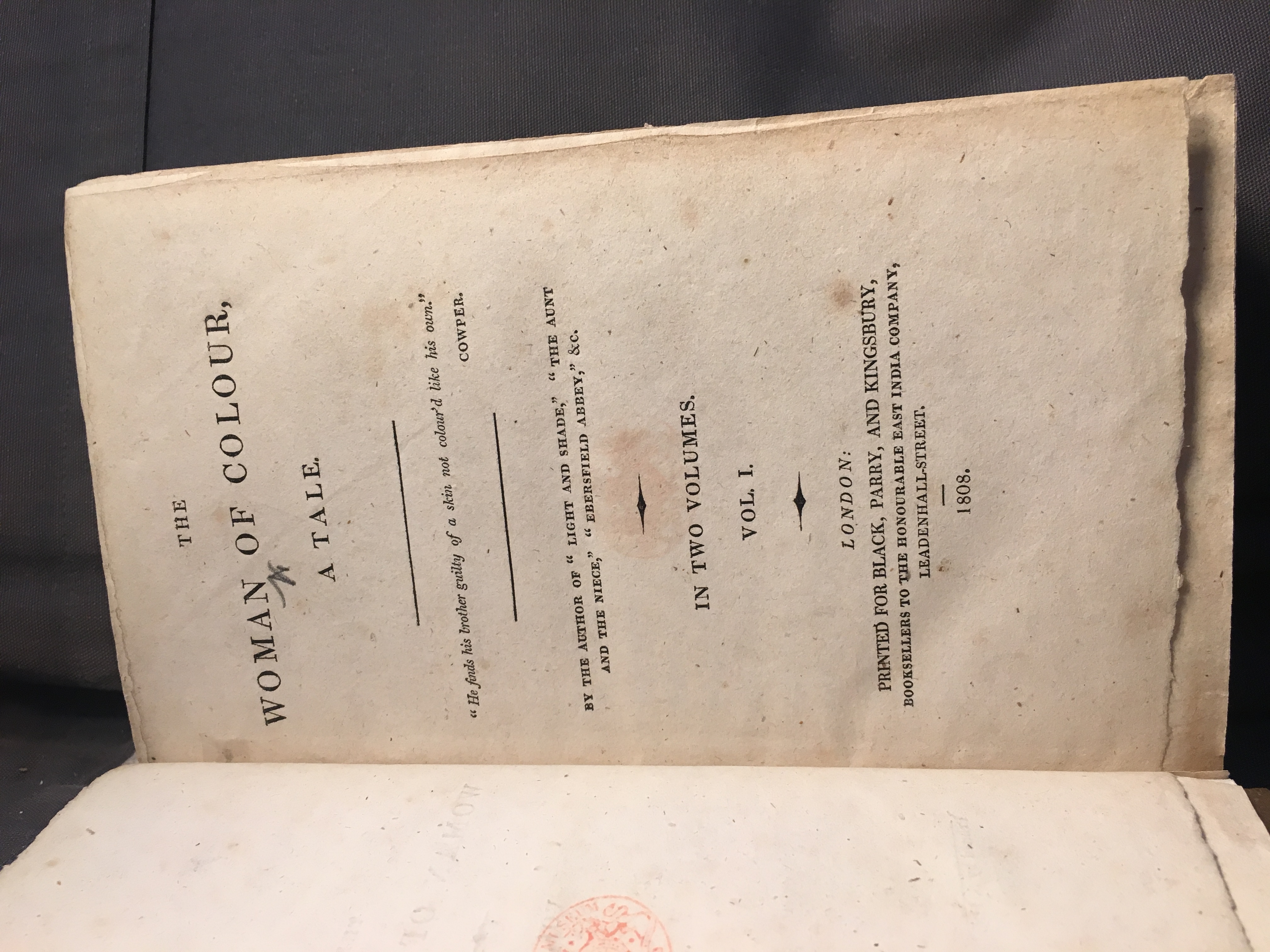 Published in the year following Britain’s abolition of the slave trade, the anonymous novel The Woman of Colour (1808) is exceptional for a number of reasons, not the least its heroine: a mixed-race heiress, Olivia Fairfield, who is the daughter of an enslaved woman and a white Jamaican planter. The novel opens with Olivia on board a ship en route to London following the death of her father; we soon learn that her inheritance is contingent on marriage to her white cousin whom she has never met. Fortunately for Olivia, her cousin, Augustus Merton proves to be kind and sensitive to her plight, if strangely melancholic; his brother and sister-in-law, on the other hand, are openly racist schemers seeking to gain control over Olivia’s fortune by preventing her marriage to Augustus. The villainy of Augustus’ sister-in-law is confirmed when we learn that she has been hiding Augustus’ first wife, Angelina Forrester, whom he believes to be dead. Angelina’s reappearance late in the novel invalidates Olivia and Augustus’ marriage; since she has technically fulfilled the requirements of her father’s will, she turns down a subsequent marriage proposal and returns to Jamaica, fortune intact.

Original title page of The Woman of Colour, courtesy of the British Library.

The contemporary reception of The Woman of Colour was generally positive; it received substantial reviews in three significant periodicals, the British Critic, the Monthly Review, and the Critical Review, all of which commented favourably on the virtue and fortitude of the novel’s heroine. However, despite the attention the work received on publication, it was largely forgotten until the early 2000s and its author remains a mystery. In the introduction to the Broadview edition of the novel, Lyndon J. Dominique “weigh[s] the facts that this text was probably written by a woman, but not a British one,” concluding, “it seems most plausible that a woman of color wrote The Woman of Colour” (32). However, facts about who this woman might have been are thin on the ground. Dominique notes the similarities of the novel’s plot to the lives of two mixed-race heiresses, Ann and Rebecca Wright, whose their father’s will contained a provision similar to that of Olivia’s, stating that they had to marry in England. Like Olivia, Ann Wright sidestepped the provision through a technicality: she married a free Black man in England shortly after her father's death. The possibility that Ann Wright authored The Woman of Colour is, in Dominique’s words, “an intriguing speculation” (33).

But it is not just the author's identity that is elusive. This author’s anonymity is compounded by a complex chain of twenty titles linked by what we would now call the byline, which is represented by the “Signed Author” field in our title records. We use the “Signed Author” field to capture precisely how an author is described on the title page and elsewhere in the work, allowing us to understand how authors presented themselves to the public. Authors in this period often identified themselves not by name but by associating themselves as the authors of previously published titles. The byline on the title page of The Woman of Colour reads, “By the author of ‘Light and Shade,’ ‘The Aunt and the Niece,’ ‘Ebersfield [sic] Abbey,’ &c.” Of the three titles listed, only one has a definitive attribution: the 1803 novel Light and Shade, described as, “By the Author of Federetta; Rebecca; Miriam; and Concealment, or the Cascade of Lantwarrybn,” which Garside, Raven and Schöwerling identify as Mrs. E.M. Foster, about whom nothing beyond her name is known. The other two novels have no explicit connection to Foster beyond the title page of The Woman of Colour: The Aunt and Niece was published anonymously by the Minerva Press in 1804 and Eversfield Abbey by Benjamin Crosby and Co. in 1806, listed as “By the Authoress of The Aunt and Niece.” No information except that on the title pages is known about the author(s) of these works.

Light and Shade: the last novel to be definitively attributed to Mrs. E.M. Foster (image of the copy held by the British Library)

Between 1809 and 1811, three novels directly reference The Woman of Colour in their bylines: The Corinna of England (1809), Black Rock House (1810), The Dead Letter Office (1811). Three further novels also reference titles in this chain of attribution, although not The Woman of Colour specifically: the title page of Substance and Shadow (1812) indicates that it is “By the author of Light and Shade; Eversfield Abbey; Banks of the Wye; Aunt and Niece, &c. &c.”; The Splendour of Adversity (1814) “By the author of Black Rock House, Winter in Bath, Corinna of England, The Dead Letter Office, &c. &c.”; and The Revealer of Secrets (1817), which was identified as “By the author of Eversfield Abbey, Banks of the Wye, Aunt and Niece, Substance and Shadow, &c. &c.” In addition to the three novels named on the title page of The Woman of Colour, these later novels identify two further novels from the first decade of the nineteenth century that may have been written by the same author: A Winter in Bath (1807), which was unhelpfully attributed to “the author of two popular novels,” and The Banks of the Wye (1808).

(If you’re confused by the above, you aren’t alone; I drafted the following flowchart to keep track of all of the attributions. I’m not sure it helped.) 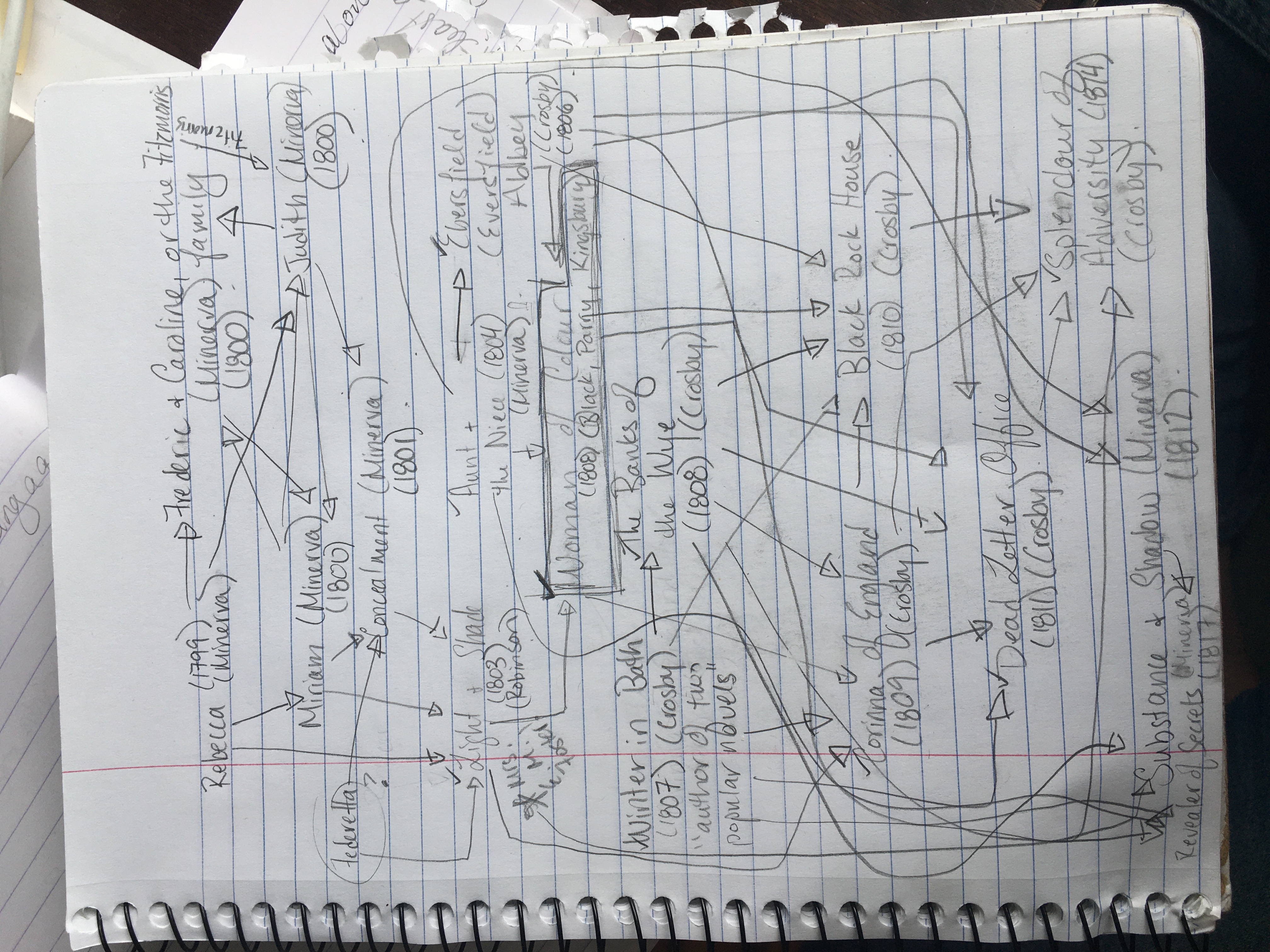 The Attribution Chain in Question: A Chart.

Why is this attribution chain so convoluted? Peter Garside has suggested that some publishers were driven “to boost a novel’s credentials . . . [by] extending the list of titles ‘by the author’ beyond the bounds of veracity” (69). Following Garside’s lead, scholars have generally been skeptical that the same author was responsible for all twenty titles. If Mrs. E.M. Foster was responsible for writing all of these novels, she would have been unusually prolific, but not outside of the bounds of possibility; given that the titles were published between 1795 and 1817, she would have averaged less than one title per year, four of which were published in 1800 alone. Some of the complexities of the chain can be explained by the movement of authors between different publishers. While publishers were eager to market a book based on the author’s previous successes, they were aware that listing titles published by another bookseller was offering the competition free publicity.

Although tracing the publishers in this attribution chain cannot definitively identify the author of The Woman of Colour, it does offer insight into why some works were listed more frequently than others on later title pages. Mrs. E.M. Forster began her career with William Lane’s Minerva Press, a publisher best known for writing the popular, light fiction. She stayed with this publisher until 1801; Light and Shade, which is the last novel that was definitively attributed to her, was published in 1803 by the more prestigious George and John Robinson. The next novel in the chain, The Aunt and the Niece, which contains no reference to Foster’s previous works on its title page, was published the following year by the Minerva Press; after that, most of the works in the attribution chain were published by Benjamin Crosby and Co. (another publisher known for light fiction), with the exception of Substance and Shadow and The Revealer of Secrets, which were published by the Minerva Press (now run by Lane’s successor, A.K. Newman, who had become a partner in the firm in 1802)… and The Woman of Colour, which was published by Black, Parry, and Kingsbury, a firm that existed in various incarnations between 1799 and 1835. Unlike the other firms in this attribution chain, Black, Parry, and Kingsbury published some fiction but, based on a cursory search of the British Library catalogue, seem to have specialized in political, ethnographic and travel writing about India—which makes sense, given their designation as “Booksellers to the East India Company.” 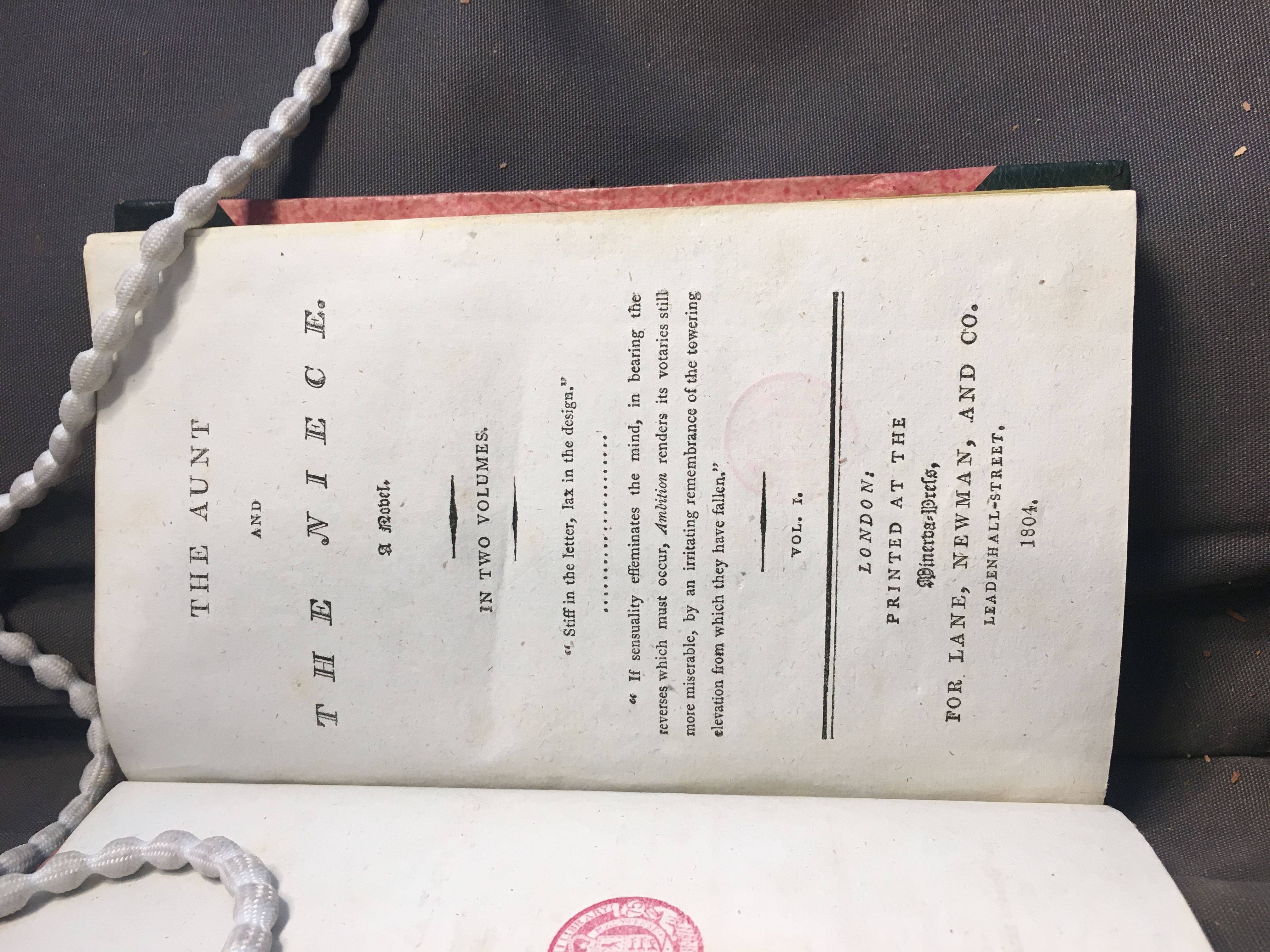 Title page for The Aunt and the Niece, which contains no information about the author.

As a general rule, each publisher’s title pages emphasize the works published by that publisher, which is likely why the title page of A Winter in Bath vaguely references “two popular novels” in its attribution, rather than naming them. This makes the absence of any information about the author on the title page of The Aunt and the Niece worth noticing; if it was authored by Foster, who had already published several novels with the Minerva Press, it is unclear why the title page would not advertise the fact. The Aunt and the Niece is the weak link that casts doubt on the attributions of subsequent titles, including The Woman of Colour. As the only work in this chain published by Black, Parry, and Kingsbury, it is a marker of The Woman of Colour’s initial success that it continued to be listed on the title pages of works published by Crosby—and a hint that perhaps at least some of these works were the product of the same pen, after all.

The Aunt and Niece (title)

The Corinna of England (title)

The Splendour of Adversity (title)

The Revealer of Secrets (title)

A Winter in Bath (title)

The Banks of the Wye (title)

Garside, Peter. “The English Novel in the Romantic Era: Consolidation and Dispersal.” The English Novel, 1770–1829: A Bibliographical Survey of Prose Fiction Published in the British Isles, edited by Peter Garside et al., vol. 2, Oxford UP, 2000.

Salih, S. Representing Mixed Race in Jamaica and England from the Abolition Era to the Present. Routledge, 2011.