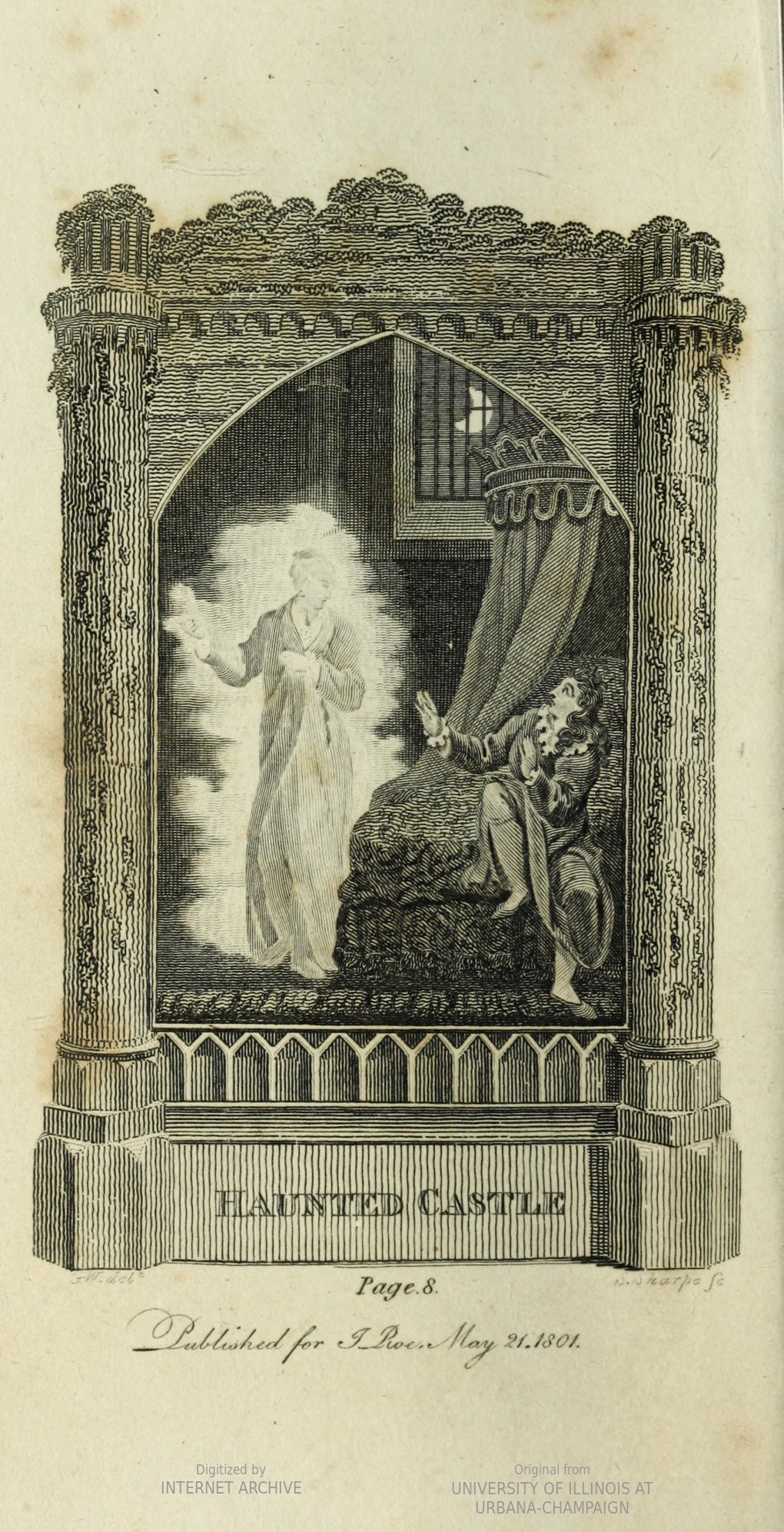 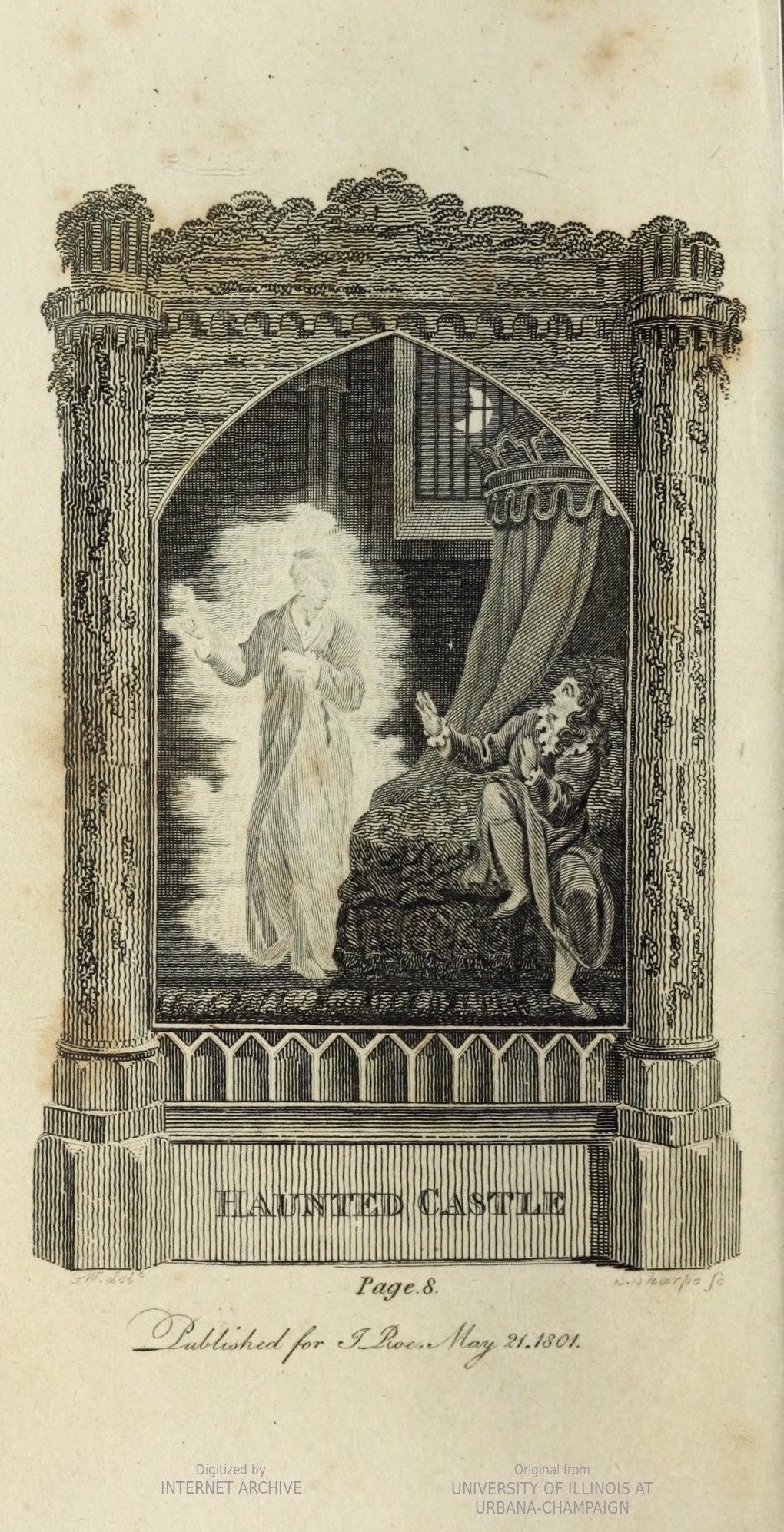 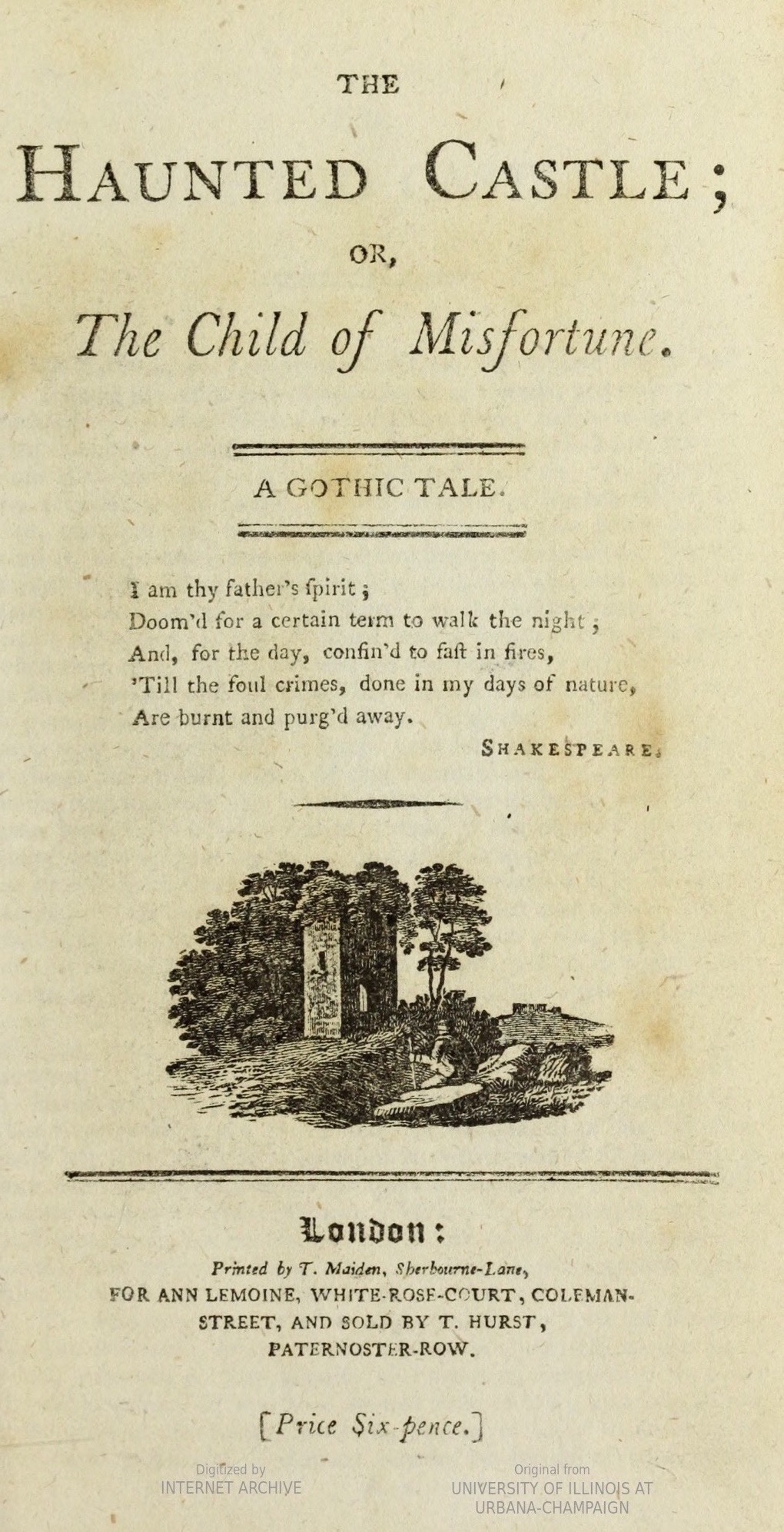 The Haunted Castle; or, The Child of Misfortune. A Gothic Tale (1801) illustrated with copper plates. First edition, HathiTrust Digital Library, 13960.

As England’s first female chapbook publisher, Ann Lemoine has published over 240 chapbooks––small, cheaply printed booklets often disseminated among lower stations––from 1795 to 1820. Although her publications consist of songs, stories, and tales, many of her books were Gothic. Our team has compiled these works in our database, a task that would not have been possible without Roy Bearden-White’s comprehensive bibliography.

Gothic literature was birthed during the late eighteenth-century. It is not a genre in our database because it is more a mode than a literary category. As the other spotlights in this Spooky Spotlight Series have shown, the term ‘Gothic’ has various connotations in the period, and Lemoine takes judicious advantage of all of them. Despite its initial association with base, sensational entertainment, ‘Gothic’ is included in Lemoine’s titles to appeal to a consumer interest since, as Bearden-White points out, Gothic literature was incredibly popular by the early nineteenth century to the point that “chapbook publishers were set to see their largest era of sales” (55-6).

Lemoine’s marketability of the word ‘Gothic’ can also be observed in our database. There are currently forty titles in WPHP that use this word and sixteen of them belong to Lemoine. (This data can be found by clicking Database > Search Titles > Adding “Gothic” in the search engine.) That said, a majority of her titles can be considered Gothic literature because of their references to the supernatural (such as The Ghost of the Rock and Tales of Terror! or, More Ghosts. Forming a Complete Phantasmagoria); mysticism or dreary romances (Barbastal, or, The Magician of the Forest of Bloody Ash: A Romance and Edmund and Albina; or, Gothic Times); and the sublime (Tales of Wonder. Containing The Castle of Enchantment; or, The Mysterious Deception and The Midnight Hour; or, the Fatal Friendship). These motifs are often found among formulaic plot structures and “foreign” lands. To read about one of the most popular Gothic novelists of the time, see Victoria DeHart’s first spotlight in this series on Ann Radcliffe.

Lemoine’s eerily-titled chapbook, The Haunted Castle; or, The Child of Misfortune. A Gothic Tale (1801), features a sophisticated engraving of a robe-clad phantom on its cover, an intricate frontispiece that would have appealed to readers of all stations.

Lemoine’s success in the chapbook trade was due, in part, to the integration of frontispieces (illustration preceding a title page) in her publications. Frontispieces were often associated with expensive and sophisticated volumes. At the tail-end of the eighteenth century, copper-printing became accessible due to the number of printing inventions already on the market, such as chemical relief etching and lithography (Bearden-White 69). Lemoine’s husband, Henry, purchased a copper-press in an effort to elevate the value and quality of the chapbooks which were, at that point, using woodcut illustrations. Teaming up with copperplate printer, Thomas Maiden, and bookseller, Thomas Hurst, Lemoine applied this technology after Henry was imprisoned in 1794 to form realistic images using a specialized etching technique. This technique allowed for different shades to be applied to an image to produce a life-like appearance.

The Haunted Castle’s frontispiece, alongside the word ‘Gothic’ in the title, would have attracted thrill-seeking readers. Although our attention is drawn to the supernatural presence of the blood-soaked phantom and the sheer terror it projects onto the young protagonist, readers will also notice an ivy-clad Gothic arch that surrounds the room, as does the barred window; the dressings on the bed; and the darkened room illuminated by a sliver of moonlight. Opposite this frontispiece is a chilling epitaph by the Ghost of Hamlet above a small engraving of the protagonist approaching a remote castle encompassed by a pitch-black forest. These engravings do not only illustrate pivotal moments in the story, but they very deliberately invoke the Gothic tropes of supernaturality, mysticism, and the sublime. If Lemoine’s spooky titles did not sway potential buyers, a mere glance at her illustrations may have convinced readers that their purchase would indeed instill horror and delight. To inspect a frontispiece of a skeleton wielding a sword, see Lemoine’s Gothic romance, The Black Forest; or the Cavern of Horrors! (1802).

Also worth noting about the frontispiece is its attribution to publisher, John Roe, who was often Lemoine’s publishing partner. Although Roe is not cited as a publisher of this chapbook, he was likely the sole publisher of the engraving.

Beyond the frontispiece and the title page lies a story that generously disperses Gothic tropes throughout its forty-four pages. If a curious reader finds themselves in mood of a haunting tale, one need only leaf through the chapbook’s digitized contents:

This haunting tale begins with Julian, who travels to find shelter after he is banished from an asylum from which he was born. Uncertain of his destination, he travels by horse and arrives at a cabin. After an evening of food and drink, he cannot sleep and remains wide-awake throughout the night. Upon hearing voices outside the cabin, he believes he is a wanted man and plans an escape. Passing several cottages, he notices a seemingly abandoned castle at the end of the road. A passing peasant warns him that the castle contains “such a shrieking, such howling, and such a hub-bub” that “the hardiest villain of them all would not sleep there” (6). A howling storm erupts and Julian is desperate for a place to sleep. Ignoring the peasant’s cautions, he decides to seek shelter in the castle anyway. Perusing through the many rooms of this empty fortress, he stumbles across a painting that features a family and a smiling infant boy. Succumbing to his exhaustion, Julian finds a bed and falls into a slumber. Hearing a blood-curdling scream, he awakens to discover a phantom “stained in many places with blood” (8) at the foot of the bed, beckoning Julian towards the door. Julian follows him to a dungeon occupied by a woman with three children. Fleeing the castle, he runs into the same peasant that warned him of the castle’s supernatural activity. Addressing Julian as “your honour” (9), the peasant is under the impression that he is the castle’s long-lost baron. Who is Julian? To whom does the castle belong? And who is the infant in the painting? Readers of this chapbook are rewarded with a hauntingly twisted journey of self-discovery and bloodshed that reveals the many mysteries of Julian’s true heritage.

Ephemeral, cheap print forms such as chapbooks are not often digitized. The Haunted Castle is one of the few publications by Lemoine that has been digitized in an open-access database; a copy can be found here. According to Bearden-White, Peter Garside and Karen O’Brien, this chapbook also contains a one-page short story, “Ivar and Matilda”, which depicts a love triangle between a thirteenth-century knight, a beautiful maiden, and a sleazy Prince (Bearden-White 135; Garside and O’Brien 486). There is only one known edition of The Haunted Castle and it ends on page 44, as seen in digitized form. “Ivar and Matilda” begins on page 47 (Bearden-White 135) which does not appear in HathiTrust’s digitization.

The Ghost of the Rock (title, first edition)

Barbastal, or, The Magician of the Forest of Bloody Ash: A Romance (title, first edition)

Tales of Wonder. Containing The Castle of Enchantment; or, The Mysterious Deception The Midnight Hour; or, the Fatal Friendship (title, first edition)

The Haunted Castle; or, The Child of Misfortune. A Gothic Tale (title, first edition)

The Black Forest; or the Cavern of Horrors! (title, first edition)

Bearden-White, Roy. “How the Wind Sits; or, the History of Henry and Ann Lemoine, Chapbook Writers and Publishers of the Late Eighteenth Century.” M.A. Thesis, Southern Illinois University, Carbondale, 2007.