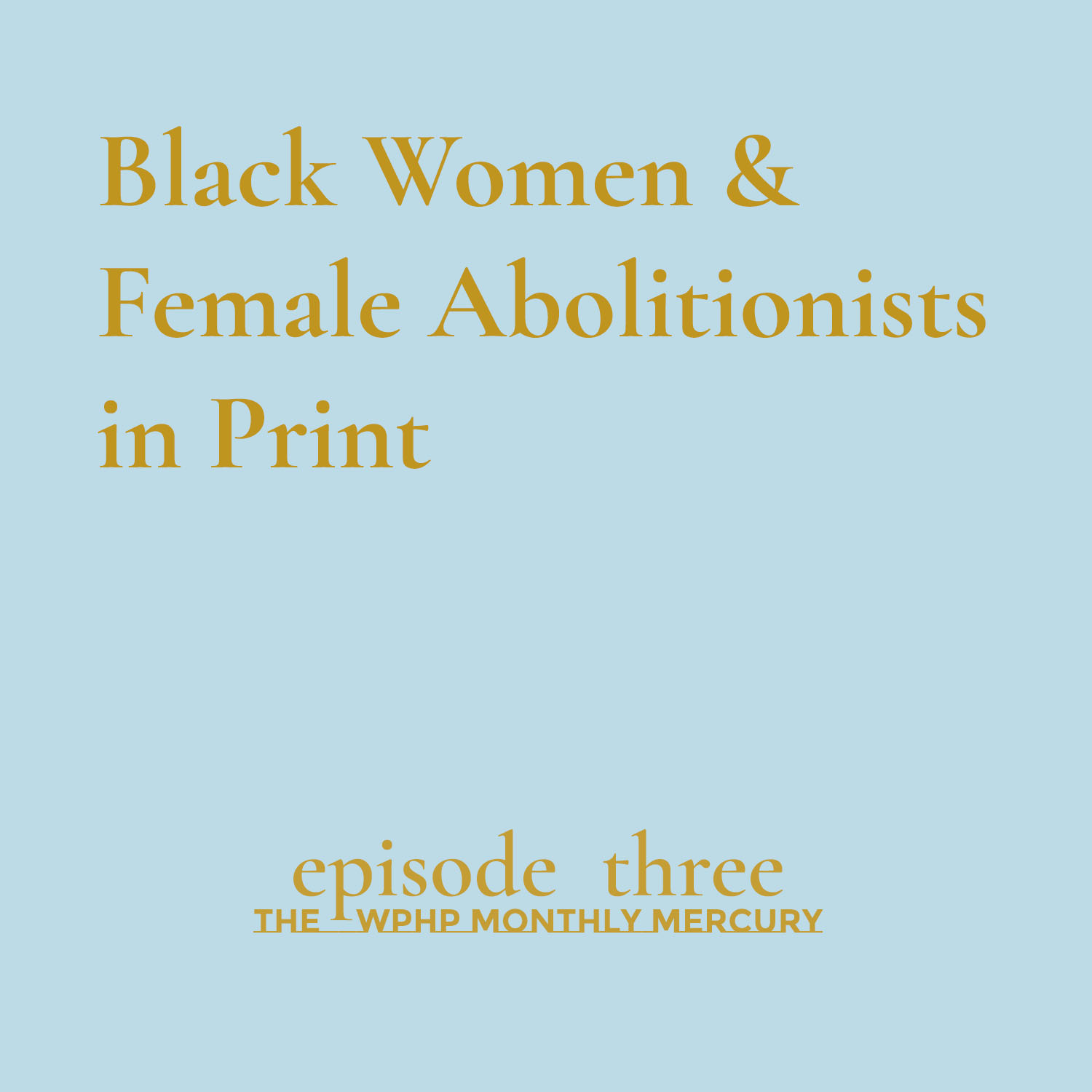 You can listen to Episode 3 of The WPHP Monthly Mercury, "Black Women and Female Abolitionists in Print", on Apple, Spotify, Stitcher, Google Podcasts, and other podcast apps, available via Buzzsprout.

You can listen to Episode 3 of the WPHP Monthly Mercury, "Black Women and Female Abolitionists in Print", on Apple, Spotify, Stitcher, Google Podcasts, and other podcast apps, available via Buzzsprout.

This double episode of the WPHP Monthly Mercury is part of Romanticism on the Net’s special issue, “Romanticism, Interrupted.” The script has been peer-reviewed.

In this month’s double episode of the WPHP Monthly Mercury, “Black Women and Female Abolitionists in Print,” the entire team of the WPHP joins hosts Kandice Sharren and Kate Moffatt to speak to the Black Women’s and Abolitionist Print History Spotlight Series that we published on the WPHP website between June 19 and July 31.

In response to and in support of the Black Lives Matter movement, this spotlight series is focused on the lives of, and books published by, three Black women authors during our period—Mary Prince, Phillis Wheatley, and Maria W. Stewart—as well as the ways in which white female abolitionists Lydia Maria Child and Elizabeth Heyrick exploited print’s powerful potential for eliminating slavery. The series also includes a spotlight on the anonymous 1808 novel, The Woman of Colour, and a spotlight on the one Black woman bookseller we have been able to identify thus far during our period—Ann Sancho, who we talked about in last month’s episode, “Women in the Imprints.”

In this episode, each member of our team speaks to the spotlight that they authored. You’ll hear from: one of our WPHP Monthly Mercury hosts and Lead Editor, Kandice Sharren, about the role of authorship in her spotlight on the anonymous 1808 novel The Woman of Colour, “The Woman of Colour: Don’t Break the (Attribution) Chain”; our other podcast host and Lead Editor of Firms, Kate Moffatt, about the question of collecting and presenting racial data provoked by her spotlight on the Black woman bookseller, Ann Sancho, “A Search for Firm Evidence: Ann Sancho, Bookseller”; Sara Penn, research assistant, about the language of enslavement and the complexity of identifying author and genre for oral memoirs that arose while writing her spotlight, “The First Slave Narrative by a Woman: The History of Mary Prince, a West Indian Slave”; Amanda Law, research assistant, about the systemic circumstances of publication for Phillis Wheatley, which Amanda discusses in detail in her spotlight “The Transatlantic Publication of Phillis Wheatley’s Poems on Various Subjects, Religious and Moral”; Victoria DeHart, research assistant, about women’s involvement in the abolition movement and the response to the radical branch of abolition known as “immediatism”, explained more fully in her spotlight “Elizabeth Heyrick, Mother of Immediatism”; our Project Director, Michelle Levy, about uneven digitization and the Black author Maria W. Stewart, and the impact of that digitization on her spotlight, “Maria W. Stewart, Activist for ‘African rights and liberty’”; and from Hanieh Ghaderi, research assistant, on her spotlight, co-written with Kandice Sharren, “Lydia Maria Child’s Radical Appeal,” about the experience of working on a feminist title from the 1830s as a current Gender Studies student.

The episode examines the challenges faced and connections made in the writing of these spotlights, as well as the many learnings that both the spotlights and the creation of this episode prompted. From the frustrations with the gaps in records about Black women, to the transatlanticism of abolition, to the question of how to responsibly and ethically account for racial data in the WPHP, “Black Women and Female Abolitionists in Print” responds to the ethos of the current moment, centring the voices of Black people and the need for immediate and radical change, while acknowledging how bibliography can guide us to a clearer understanding of the interactions between gender, race, abolition, and print.

We would like to thank the reviewers and editorial team of Romanticism on the Net for their expertise and willingness to take on this format. Our thanks also to Colleen Thiesen and Kate Mitas for helping us access Roderick Cave’s article, “The Stockdale Sisters Revisited.”

“The First Slave Narrative by a Woman: The History of Mary Prince, a West Indian Slave” (Sara Penn)

The Abolition of Slavery Project

Lynch, Deidre Shauna. The Economy of Character: Novels, Market Culture, and the Business of Inner Meaning. Chicago UP, 1998.

Salih, Sara. Representing Mixed Race in Jamaica and England from the Abolition Era to the Present. Routledge, 2011.

Sancho, Ignatius. Letters of the late Ignatius Sancho, an African. In two volumes. To which are prefixed, Memoirs of his Life. Frances Anne Crewe, ed., and Joseph Jekyll, Memoirs. London: printed for the subscribers, 1782, HathiTrust https://catalog.hathitrust.org/Record/000772723. Accessed 25 June 2020.

Taylor, Diana. The Archive and the Repertoire. Duke UP, 2003.